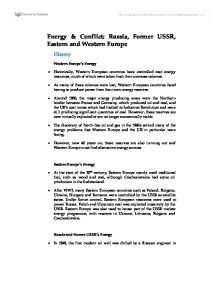 Energy & Conflict: Russia, Former USSR, Eastern and Western Europe History Western Europe's Energy * Historically, Western European countries have controlled vast energy resources, much of which were taken from their overseas colonies. * As many of these colonies were lost, Western European countries faced having to produce power from their own energy reserves. * Around 1900, the major energy producing areas were the Northern border between France and Germany, which produced oil and coal, and the UK's coal mines which had fuelled its Industrial Revolution and were still producing significant quantities of coal. However, these reserves are now virtually exploited or are no longer economically viable. * The discovery of North Sea oil and gas in the 1960s solved many of the energy problems that Western Europe and the UK in particular were facing. * However, now 40 years on, these reserves are also running out and Western Europe must find alternative energy sources. Eastern Europe's Energy * At the start of the 20th century, Eastern Europe mainly used traditional fuel, such as wood and coal, although Czechoslovakia had some oil production in the Sudetenland. * After WW2, many Eastern European countries such as Poland, Bulgaria, Ukraine, Hungary and Romania were controlled by the USSR as satellite states. Under Soviet control, Eastern European resources were used to power Russia. ...read more.

If Russia continues to supply Europe with even more of its energy, this could give the Russians a very powerful bargaining chip and cause problems for Western Europe. What's in the Future? * Russia is currently the EU's largest energy supplier. Latvia, Slovakia, Finland and Estonia are 100% reliant on Russia for their gas. The EU gets 40% of its gas from Russia. * However, that could all change. The Czechs and the Hungarians are working on a pipeline called Nabucco which will bring gas from central Asia to Europe via Turkey and the Balkans, bypassing Russia. * Russian oil companies have not been investing enough in exploration within Russia and some analysts predict that there could be some stagnation of the Russian energy markets. * Europe is desperate to decrease its reliance on Russia for its energy. European countries are looking into energy reserves in Northern Africa as an alternative to reliance on Russia and many countries are investing in nuclear power or in renewable sources such as wind, solar, tidal and HEP. * In August 2008 when Russia invaded Western-friendly Georgia many people felt that their fears about energy security had been realised. * Some experts predict that in the future Russia's aggressive energy policy could provoke something similar to the Cold War, but in terms of energy supply, where increasing gas prices and the threat of withdrawal of supplies are the new weapons. ?? ?? ?? ?? ...read more.