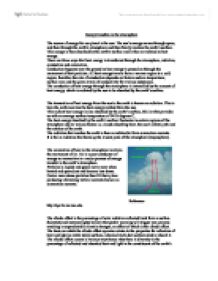 Energy tranfers within the atmosphere

2. Light coloured ice reflects the suns energy back efficiently. 3. The altitude of ice of the melting ice is reduced so it becomes harder for new ice to form. The planet's albedo is a key climate variable in determining the radiant heat energy input to the planet combined with the solar constant. The planets annual average albedo is 0.30 (30%). The albedo varies according to geographical regions and times of year. A table showing the percentage of reflected solar radiation. Albedo effect Earth 31% Fresh Snow 75-95% Melting Snow 40-60% Thick Cloud 60-90% Thin Cloud 30-50% Ploughed Field 5-20% Grass 10-30% Deciduous Forest 15-18% Water 6-10% Deserts 25-35% Coniferous Forest 9-15% Urban Areas 15% Tropical Forest 7-15% The income of the earth's solar radiation is from the sun. The energy that reaches us from the sun is 148,800,000 km away providing us with an average surface temperature of 14 degrees C. The earth is also reflecting and re-radiating the same amount of solar radiation that it is receiving. Incoming solar radiation is absorbed by the Earth's surface, clouds, gases, the atmosphere and molecules in the atmosphere. ...read more.