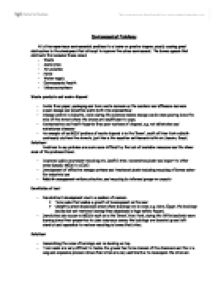 Environmental Problems All cities experience environmental problems to a lesser or greater degree, usually causing great obstruction to the developers that attempt to improve the urban environment. The brown agenda that obstructs this includes these issues: * Waste * Dereliction * Air pollution * Noise * Water supply * Environmental health * Urban ecosystems Waste products and waste disposal * Solids from paper, packaging and toxic waste increase as the numbers and affluence increase * Liquid sewage and industrial waste both rise exponentially * Sewage control in Calcutta, India-during the monsoon season sewage can be seen pouring down the side of the street where the drains are insufficient to cope. * Contamination and health hazards from poor systems of disposal, e.g. rat infestation and waterborne diseases * An example of an MEDC problem of waste disposal is in the 'Bronx', south of New-York-rubbish continually clutters the streets, just like in the squatter settlements in Rio de Janeiro, Brazil. Solutions: Solutions to any problem are made more difficult by the lack of available resources and the sheer scale of the problems faced. * Improved public awareness-recycling etc, landfill sites, incineration plants and export to other areas (usually MEDC to LEDC) * Development of effective sewage systems and treatment plants including recycling of brown water for industrial use * Rubbish management-refuse collection, and recycling by informal groups or councils Dereliction of land: * Can obstruct development-due to a number of reasons- > Toxic leaks that enable a growth of development on the land > Unsightly areas-abandoned areas where buildings are in ruins, e.g. ...read more.

* The water supply can also become polluted as inadequate sewerage facilities allow the spread of harmful bacteria-can lead to death from water-borne disease-one of the biggest causes of high infant mortality rates. * Lack a clean water supply means that the risks of disease are very high. * Water pollution > Untreated sewage from the Ganga from cities such as Kanpur or Varanasi > In urban areas, water pollution results from leaking sewers, landfill and industrial waste, including oil and chemicals > In some LEDCs, agricultural pollution from fertilizers and manure is a problem > In some LEDCs, agricultural pollution from fertilizers and manure is a problem-leaking into the water supply Solutions: * Reservoirs * Pipeline constructions (Development of drainage systems and sewers) * Desalination of salt water * Water conservation strategies * Control points-regulation etc * Installing sewage treatment plants in the largest river settlements * Providing low-cost sanitation facilities and bathing areas * Building electric powered crematoria to reduce the numbers of bodies being burnt on the river banks * Putting flesh-eating turtles in the river to clear up the body remains * Monitoring river quality to ensure that water quality consistently improves * Promoting organic farming-elimination of chemical fertilizers and pesticides etc Environmental Health: * Air in Mexico City, Mexico, is so poor that breathing it is like smoking 60 cigarettes a day. * Chemicals such as Carbon Monoxide (which can attach to the red blood cells and cause serious lung problems and even death), ...read more.

* Since the city often does not live up to its obligation to haul away the trash, it can build up on street and become a source for disease. Cairo, Egypt * South of the delta * Some squatter settlements * City of the dead-people live in the buildings for the tombs-no water system, sewage system, shops etc in this area-lack of provisions * Very crowded-people living on the roofs * Housing declines-the buildings crumbling-are not restored * Rubbish, waste, sewage problems * Pollution * Sewage systems broken-floods the streets * Rubbish-Christians recycle the rubbish from the dumps-but Muslims won't due to their religion-Might have pig products there Solutions: * Egyptian and British scheme-water system-pipes set up for sewage all across the county-but slurry is pumped up to the streets from the construction-spreading disease etc MEDCs: The 'Bronx', New-York * Poor repairs-houses burnt down in 1970's to claim money off the government-landlords used to burn them down * Healthcare-poorer than the 'white area' * Rubbish cluttering up the streets * People living on the streets * Air pollution from the city-the buildings and factories are old-not filter systems-lots of air pollution * Boarded up houses-dereliction-leads to brown field sites Hackney, London, UK * Lifts are smelly etc-people urinate in the lifts * Construction in the flats are failing, the rooms are damp, they are expensive to maintain * Elderly people contract pneumonia from the damp conditions-causes health problems like bronchitis Solutions: * Demolishment of the blocks of flats * Rebuilding of flats-cleaner-easier to maintain-CCTV cameras set up http://www.lib.utexas.edu/maps/index.html ...read more.