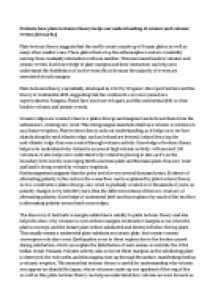 Evaluate how plate tectonics theory helps our understanding of the distribution of seismic and volcanic events.

﻿Evaluate how plate tectonics theory helps our understanding of seismic and volcanic events (40 marks) Plate tectonic theory suggests that the earth?s crust is made up of 8 main plates, as well as many other smaller ones. These plates float a top the asthenosphere and are constantly moving, thus constantly interaction with one another. This movement leads to volcanic and seismic events. Such knowledge of plate margins and their interaction can help us to understand the distribution of such events; this is because the majority of events are associated at such margins. Plate tectonics theory was initially developed in 1912 by Wegener. His report but forward the theory of continental drift, suggesting that the continents were once joined as a supercontinent, Pangaea. Plates have since moved apart, and this continental drift is what leads to volcanic and seismic events. Oceanic ridges are created when two plates diverge and magma rises between them from the asthenosere, creating new crust. ...read more.

The discovery of destructive margins added more solidity to plate tectonic theory and also helped to show why volcanoes occur at these margins. Destructive margins occur when the plates converge, and the denser plate is then subducted and destroyed below the top plate. This usually means a continental plate subducts an oceanic plate, but oceanic-oceanic convergences do also occur. Earthquakes occur in these regions due to the friction caused during subduction, which can explain the distribution of such seismic events like the 2004 Indian Ocean Tsunami. Volcanic activity also occurs at these margins; as the subducting plate is destroyed, the rock melts, and this magma rises up through the surface, manifesting itself as a volcanic eruption. This means that tectonic theory is useful for understanding why volcanic arcs appear on islands like Japan, whose volcanoes make up one quadrant of the ring of fire. As well as this, plate tectonic theory can help us understand how volcanic arcs are formed, as these are created when oceanic plates collide, producing the same volcanic events, which is how Indonesia was created. ...read more.

This occurred on the Pacific plate, resulting in the Hawaiian island arc, which ends with active volcanoes, such as Mauna Loa the island currently above the hotspot. This means that despite its apparent irrelevance, which was first seen to refute plate tectonic theory; this demonstrates that plate tectonic theory can help to explain anomalous tectonic events. There are also further seismic events whose distribution cannot be explained by plate tectonic theory, as they were of human creation. For instance, 200 small earthquakes were triggered when the Hoover Dam in the US was being filled; these earthquakes were not connected with any fault line or plate movement. Earthquakes in the UK have also been a result of fracking, where shale gas is extracted through drilling the crust, which has resulted in minor earthquakes in Blackpool of around 2.3 on the Richter scale. This demonstrates that although plate tectonic theory can explain the majority of seismic events, it cannot explain occurrences such as these. ...read more.