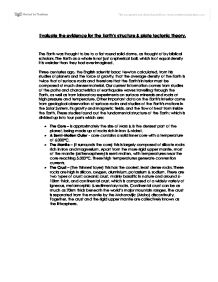 Evaluate the evidence for the Earth's structure & plate tectonic theory. The Earth was thought to be to a flat round solid dome, as thought of by biblical scholars. The Earth as a whole is not just a spherical ball, which is of equal density it is weirder than they had ever imagined. Three centuries ago, the English scientist Isaac Newton calculated, from his studies of planets and the force of gravity, that the average density of the Earth is twice that of surface rocks and therefore that the Earth's interior must be composed of much denser material. Our current information comes from studies of the paths and characteristics of earthquake waves travelling through the Earth, as well as from laboratory experiments on surface minerals and rocks at high pressure and temperature. Other important data on the Earth's interior come from geological observation of surface rocks and studies of the Earth's motions in the Solar System, its gravity and magnetic fields, and the flow of heat from inside the Earth. These studies found out the fundamental structure of the Earth; which is divided up into four parts which are: * The Core - is approximately the size of Mars & is the densest part of the planet, being made up of rocks rich in iron & nickel. * A Semi-Molten Outer - core contains a solid inner core with a temperature of 6,000�C. ...read more.

* Climatological Evidence - places as far apart as Antarctica, North America, Svalbard & the UK all contain coal deposits of a similar age, which were formed in tropical conditions. Yet they are not in tropical zones anymore & must have drifted since the Carboniferous period. * Biological Evidence - findings have shown that there have been similar fossil formations on either side of the Atlantic. For instance, the reptile Mesosaurus, are only found in South America & Southern African sediments of the Permian age (around 280 million years ago) Although, Wegner had convincing evidence that continental drift was occurring, there was a flaw in this theory. The flaw was that there was no explanation of the mechanism by which the continents could move over an obviously solid Earth. It was not till the end of the Second World War that major discoveries began to take place. In 1948, a survey of the Oceanic (Atlantic) floor revealed a continuous ridge (later called Mid-Atlantic ridge) running largely North to South. It proved to be around 1,000km wide, reaching heights of 2.5km, & was composed of volcanic rocks. Similar submarine mountain ranges were later found in the Pacific Ocean extending over 5,000km. Further surveys of the ocean floors during the 1950's showed surprisingly regular patterns of palaeomagnetic striping about the ridges. When lava flows out of the mouth of a volcano, the magnetic domains within the iron-nickel minerals in the lava are aligned with the magnetic field of the Earth (at that time). ...read more.

Subsequently, Plate tectonics comes into the picture it claimed that the crust was a colossal jigsaw puzzle, which is devised of seven major plates. Yet the true picture is far more complex, with over 50 plates moving at different rates and in different directions. All these plates are in motion (on average 5-10cm/year), but some move faster (up to 18cm/year).The crucial difference here was that not all of the plates were colliding and producing landforms (which are visible today). The centre of this theory lies in the idea that the higher temperatures at the centre of the Earth's core, and heat released by radioactive decay of elements within the mantle, help create convection currents. These currents cause zones where there is hotter, more liquid magma, which is thought to cause continuous circulatory motion in the asthenosphere that causes the crustal plates to move. The third type of plate boundary is Conservative plate boundaries, which are also often referred to as passive or slip margins; the reason for this is that (where these two plates meet) the motion of the plates is either parallel or nearly parallel. (An example of this is the San Andreas Fault in California). They are referred to as being slip margins because when these plates rub against each other sometimes the friction in between them builds up to a point where they stop moving entirely. When this usually occurs the plates have become jammed & an immense amount of pressure is needed to separate them again. Once this pressure is released in the form of earthquakes but is not associated with active volcanism. ...read more.