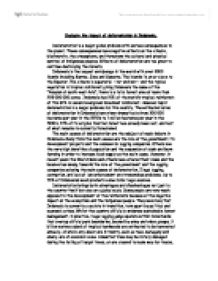 Evaluate the impact of deforestation in Indonesia.

Evaluate the impact of deforestation in Indonesia. Deforestation is a major global problem with serious consequences to the planet. These consequences have negative effects on the climate, biodiversity, the atmosphere, and threatens the cultural and physical survival of indigenous peoples. Effects of deforestation are too great to continue destroying the forests. Indonesia is the largest archipelago in the world with over 3000 islands including Borneo, Java and Sumatra. The islands lie on or close to the Equator. The climate is equatorial - hot and wet - and the typical vegetation is tropical rainforest giving Indonesia the name of the "Amazon of south-east Asia", there is a total forest area of more than 225 000 000 acres. Indonesia has 10% of the world's tropical rainforest; of this 61% is lowland evergreen broadleaf rainforest. However rapid deforestation is a major problem for this country. The estimated rates of deforestation in Indonesia have risen dramatically from 300 000 hectares per year in the 1970's to 1 million hectares per year in the 1990's. 72% of its original frontier forest has already been lost, and half of what remains is currently threatened. The main causes of deforestation are the subject of much debate in Indonesia. Many think the main causes are the role of the government, its development projects and the commercial logging companies. Others see the very high densities of population and the expansion of slash and burn farming in order to increase food supply as the main cause. ...read more.

Indonesia has the largest number of mammal species, over 20 000 plant species, and 17 percent of the worlds birds and many species have still to be discovered. With the destruction of the forest, species become extinct everyday, biodiversity and biomass are reduced, and the rates of net primary productivity are decreased. Tigers, orang-utan, gibbons, rhino, bears, elephants, crocodiles and thousands of other species in Indonesia are dependant on intact forest, and therefore face a serious risk of extinction due to habitat destruction. The clearance and burning of the rainforests may also be the cause of irreversible global climatic change. Huge amounts of carbon dioxide from the carbon that had previously been locked up in the biomass of the rainforest are suddenly released into the atmosphere. This traps out going long wave heat radiation from the Earth within the atmosphere - the greenhouse effect. This may be causing global warming. As a result sea levels are likely to rise, since the volume of water in the oceans will increase due to the general expansion of water as the oceans become warmer and glaciers and polar ice caps melt. Forest clearance also has far reaching effects on global rainfall patterns, since water vapour is no longer passed into the atmosphere from the trees by evapotranspiration, but becomes surface runoff instead. This absence of atmospheric water vapour may cause the amount of precipitation to be reduced or bring lengthy periods of drought, which increase the likelihood of desertification. ...read more.

Debt for nature schemes allow international conservation organisations to provide a debtor country with some relief from, and rescheduling of, their debt burden in exchange for guarantees that some of the money that would otherwise have been used for debt repayments is instead out towards conservation schemes and projects to protect the environment. On the whole it is felt that the negative impact of deforestation of the Indonesian rainforest totally outweighs the advantages. However, the consequences of the disadvantages take a long time to come about and do not affect the people of Indonesia directly. For example the global effects of deforestation such as the greenhouse effect, global climate and patterns of rainfall worldwide are seen to be important by everybody including Indonesians, as far they are concerned they are remote and removed from their everyday experience. People in developing countries are more concerned with employment, with earning enough money to survive. Their governments want desperately to boost their economies to achieve greater prosperity such as they see in the MEDW and this is their priority. The important thing for the future of the planet will be to establish a system that both protects the environment and respects the legitimate aspirations of developing. The concept of sustainable development as put forward by governments of the MEDW offers a way forward. As Paul Jepson, a researcher at Oxford's School of Geography, said: " We hope that not only the Indonesian government but also donor governments, industry, the scientific community and the conservation movement will unite in the face of the unprecedented forest loss to take positive action to protect Indonesia's forests." ...read more.