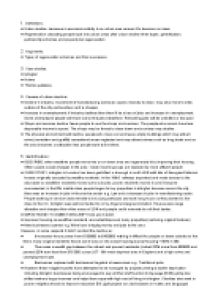 ﻿1. Definitions: 1. Urban decline: decrease in economic activity in an urban area causes it to become run down 2. Regeneration: attracting people back into urban areas after urban decline three types: gentrification, partnership schemes and property led regeneration 1. Arguments: 1. Types of regeneration schemes and their successes 1. Case studies: 1. Islington 2. Hulme 3. Thames gateway 1. Causes of urban decline: 1. Decline in industry: movement of manufacturing overseas causes industry to close, may also move to sites outside of the city centre where rent is cheaper 2. Increase in unemployment: if industry declines then there?ll be a loss of jobs and increase in unemployment. Some unemployed people will move out to find jobs elsewhere. Remaining jobs will be unskilled or low paid 3. Shops and services decline: fewer people to use the shops and services. The people who remain have less disposable income to spend. The shops may be forced to close down and services may decline 4. The physical environment will decline: people who move out and leave empty buildings which may attract crime (vandalism and graffiti) recreational areas neglected and may attract crimes such as drug deals and as the area becomes unattractive less people want to live there. 1. Gentrification: 1. DESCRIBE: when wealthier people move into a run down area and regenerate it by improving their housing. Often causes social changes in the area - lower income groups are replaced by more affluent people 2. ...read more.

However through local government schemes and educational schemes this has the potential to be greatly reduced. 6. Partnership schemes: 1. DESCRIBE: involve local councils working with businesses and local communities to come up with regen plan. Often try to improve the economy and environment in area. Aim to make social improvements e.g. Community centres. 2. SCHEME: one partnership scheme ?city challenge? aimed to regen urban areas. 31 CCPS ran in deprived areas between 92-98 and Government provided 1.14bn and they attracted a total investment of 7.5bn. Cities competed with each other for funding which aimed to regen deprived areas by improving physical environment, economy and QoL 3. CASE STUDY: Hulme CCPS: in the 60?s cleared for redevelopment after it became overcrowded with people living in poor quality houses; locals moved into flats which had problems with pest infestation and poor heating. Families moved out with flats being unlivable and the area suffering with unemployment and crime; in 92 HCCPS formed and Mancs worked with companies to design a 37.5m regen package. The aim was to create a strong community feel by building a mix of housing businesses and shops and community spaces and improving transport links. 4. COMBAT DECLINE: in some respects HCCPS did combat decline: 1. tower blocks were demolished and a variety of new housing was erected with a mixture of council owned houses and private ones to encourage people to move in; was more aesthetically pleasing - population grew by 3.3% in 10 years. ...read more.

Barking train station and local roads were upgraded and existing bus routes will serve the area improving accessibility. There has also been criticisms 1. accused of not listening to residents? opinions e.g. Gave planning permission for a temporary nightclub to be erected close to the Olympic Park despite objections from local residents. There were objections to a proposed tower block at Virginia Quay which local councillors thought didnt provide enough affordable housing leading to overcrowding, lack of parking and loss of open space. 1. In regard to combatting causes of urban decline this scheme seems to help develop areas in regard to social, economic and environmental issues and invited a huge number of people back to the area. Also the opening of the Olympic Park contributed greatly to the rearrival of people to the area and some of it has been converted into affordable housing. Despite having the downfall of local authorities not listening to locals unlike partnership schemes, the benefits seem to greatly outweigh this by taking into account the needs of the locals. 8. Conclusion: there are many different schemes that local authorities can use to help redevelop their area and this provides a means for people to get involved and suggest ideas of what?s needed. These case studies provide evidence that urban decline can be combatted to an extent but factors such as the reputation of an area, the money they have to redevelop and the means of redeveloping all affect to what extent these schemes will be successful. ...read more.