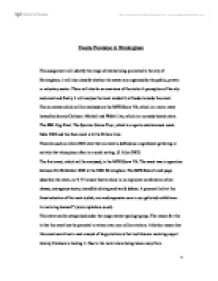 Events Provision in Birmingham This assignment will identify the range of events being promoted in the city of Birmingham, it will also classify whether the events are organised by the public, private or voluntary sector. There will also be an overview of the visitor's perception of the city and event and finally it will analyse the local resident's attitudes towards the event. The six events which will be analysed are the MPH Show '06, which is a motor event hosted by Jeremy Clarkson. Mitchell and Webb Live, which is a comedy sketch show. The BBL Cup Final. The Survivor Series Tour, which is a sports entertainment event. Mela 2006 and the final event is Little Britain Live. Theorists such as Allen 2002 state that an event is defined as a significant gathering or activity that takes place often in a social setting. (J. Allen 2002) The first event, which will be analysed, is the MPH Show '06. The event was in operation between 26-29 October 2006 at the NEC Birmingham. The MPH Show's web page describes the event, as "a 75 minute theatre show in an explosive combination of car chases, outrageous stunts, incredible driving and world debuts. A personal look at the finest selection of the most stylish, rare and expensive cars in our galleried exhibitions - its motoring heaven!" (www.mphshow.co.uk) This event can be categorised under the mega events typology group. ...read more.

The BBL Cup Final is an annual event, which is to be held at the NIA, is being organised by the British Basketball League Association. This is part of the public sector. Websites such as www.whatsis.techtarget.com have given a definition to the public sector, which states, "The public sector overlaps with the private sector in producing or providing certain goods and services. The extent of this overlap varies from country to country, state to state, province to province, and city to city." By evaluating this statement and relating it to events, the public sector needs sum form of assistance from the private sector such as funds and sponsorship. It can be an advantage for both private and public sectors, as the private sector organisation is getting good recognition by giving a helping hand to the public sector organisation. The Asian Mela event is presented by the Asian television station Zee and events firm Clarion Events. Both companies are part of the private sector. This part of the assignment will explain the impact that the actual events provision of the city has on visitor perceptions. When discussing event impacts there are various elements that need to be considered. These elements are as follows, social/cultural, economics, political and developmental. The social/cultural implications are to bring increased community spirit and bring people from different cultures to unify and enjoy the events. ...read more.

This can result in pride in association with the city. It can also be a positive for locals because it is bringing in tourists and even be welcomed by shops and other business. The comedy events Little Britain Live and Mitchell & Webb Live will be welcomed, as both events are family friendly and are based on television shows that are well known. Birmingham is known for being a cultured city, with evidence being backed up by Birmingham City Councils webpage which provides statistics in the form of charts. One way of showing this is by holding an event targeted for its Asian community, The Asian Mela. As Birmingham has a high percentage of Asians as one of its many ethnic groups, the Asian community will welcome the event. By holding this event, it can even attract other people from different ethnic groups and be welcomed by everyone. A family event for al to enjoy the community will be proud to have it in their city. In conclusion a city such as Birmingham will welcome it. The main factor is that it can hold majority of events within its venues such as the NEC, the NIA and the Symphony Hall. Bringing in more events will increase tourism and revenue for the city. This is a plus as the money generated from the events can go on to bring in more opportunities for people with different interests and backgrounds. Making the city a hotspot for events. ...read more.