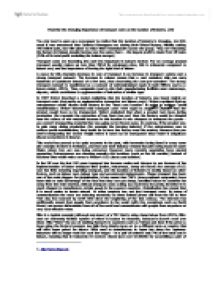 Examine the changing importance of transport costs on the location of industry. (20) You only need to open up a newspaper to realise that the location of industry is changing. Just this week it was announced that Cadbury-Schweppes are closing their Bristol factory, initially cutting 700 British jobs, but with plans to make 8000 redundancies across the group. They are relocating the factory in Poland, despite having very few sales there - the largest profit is made from UK sales (20% of its total profit excluding the Adams merger). Transport costs are becoming less and less important in today's market. For an average product transport usually makes up less than 5%1of its wholesale price, this is minuscule compared to labour cost, and the importance of having the right kind of labour. A cause for this dramatic decrease in cost of transport is an increase in transport volume and a strong transport network. The increase in volume means that a vast container ship can carry hundreds of containers instead of a few tens, thus decreasing the cost-per-container. The strong transport network is manifested as a network of well-maintained roads in both MEDCs and to a lesser extent, LEDCs. Thus, companies tend to site their manufacturing facilities near motorways, airports, which contributes to agglomeration of industries of similar type. In 1907 Weber theorised a model explaining that the location of industry was based mainly on transport costs (but partly on agglomeration economies and labour costs). ...read more.

In terms of communication the rates are reducing massively as three minute phone call from the UK to New York city has lowered by $236 USD since the beginning of the last century. The Internet has additionally meant that people from anywhere in the world (with few exceptions such as North Korea) can access information from all of the world and communicate with people from anywhere at very cost-effective rates. Nike is a typical example (although not alone) of a TNC that is using cheap labour from LEDCs, Nike uses an extremely flexible system of where it locates its factories, because it doesn't even own them. Nike "hires" the use of clothing factory's in countries such as Taiwan and then if the price to keep using the factory becomes too high they simply move on to a different area or country that will offer lower prices for labour. Nike used to manufacture in Japan but since the Japanese labourers will no longer work for such low wages - in a pair of trainers only 7% of the total cost is labour, meaning that in Indonesia 45 workers shared just over $1.60USD for assembling a pair of Air Pegasus shoes. The labour costs are the main reason for Phil Knight (MD of Nike) to locate manufacturing in countries like Indonesia and Taiwan, and even though the market for Nike trainers are far away in countries like the USA the transport costs are a menial figure in comparison to the savings of choosing not the manufacture in the USA. ...read more.

Weber assumes that the plane in which the businesses are located in is flat, with transport available throughout the whole plane in every direction. It is also assumed that raw materials that are considered ubiquitous can actually be found everywhere on the plain. This is not usually the case since there are rarely areas with a transport system that is available in every direction going to every location, and an area is very rarely completely flat. Materials considered to be ubiquitous may not be since there are areas in the world where is is very difficult to get an electricity supply or a water supply too. The classical location theory assumes that all entrepreneurs know everything about everything and know all the details about factors that may effect his or her decision in locating a factory or business, of course this is not true as it is impossible for an entrepreneur to know every possible locations they could choose and all of the merits and faults of each one. All of these assumptions are "flaws" in the theory but the model is not all bad, at the time it was produced (1909) transport costs were very large, important, part of the cost of a product, it would have been be extremely difficult and much too complex to create a theory that accommodated for the assumptions made, so much so that it would become too complicated to use as a model and would become more an explanation that would be hard to relate to all situations. 1 http://www.dft.gov.uk ...read more.