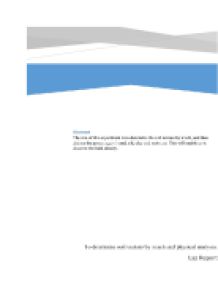 Experiment to determine soil texture by touch and physical analysis

﻿________________ Introduction: The most important measure of soil is texture and size distribution of mineral particles. This is because the divided soil particles have a greater surface are per unit mass than the combine particles (Coarse particles). Therefore it can be said that a large mass of gravel or sand, will be less relevant in relation to chemical reactions than a minor amount of fine silt and clay. This is because it allows for better exposure to nutrients and the retention of moisture. Soil texture is the categorization of soil particles into three groups. Firstly, clay which is less than 0.002mm. Secondly, silt which is between 0.002 and 0.005, and third, sand which is between 0.005 and 2mm. With the use of Stoke?s law that is the governing rate of sedimentation of particles that are suspended in water. ...read more.

However, our results could have been victim of human error or random error due to the sample soil being dark brown which meant that it should have originally been a silt clay loam. This could have resulted from the lack of precision and accuracy while carrying out the experiment in relation to accurate measurements and procedures. Conclusion: On the whole, the overall aim of the experiment was reached. We were able to determine the soil texture through the method of feeling, which allowed us to discover that the soil sample was mostly sand. The hydrometer allowed us to analyse and get more accurate results of how much clay, silt, and sand was actually in the sample. The moisture rate was then successfully calculated which enabled us to proceed further and calculate the bulk density of the soil. ...read more.