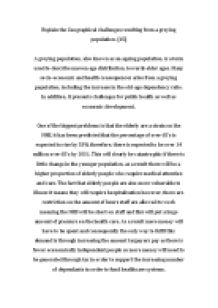 Explain the geographical challenges resulting from a greying population.

﻿Explain the Geographical challenges resulting from a greying population. [15] A greying population, also known as an ageing population, is a term used to describe uneven age distribution, towards older ages. Many socio-economic and health consequences arise from a greying population, including the increase in the old-age dependency ratio. In addition, it presents challenges for public health as well as economic development. One of the biggest problems is that the elderly are a strain on the NHS, it has been predicted that the percentage of over 65?s is expected to rise by 53% therefore, there is expected to be over 14 million over 65?s by 2031. This will clearly be catastrophic if there is little change in the younger population, as a result there will be a higher proportion of elderly people who require medical attention and care. ...read more.

a lot of money, but with the younger population being considerably low it will increase the pressure on careers options, even then medicine is considered as one of the toughest courses at university so it?s a matter of would the younger population be able to cope with this demand in years to come. It may be that this wouldn?t be a risk the government would be prepared to take so another option would be increasing the retirement age. At the moment it is 65 however this would be expected to rise to about 67 or even as high as 70. Governmental and public opinions play a major role as some feel that the elderly are a burden on our system and they don?t bring anything positive to the economy yet, some think that the elderly are obliged to access the NHS and a pension as they have paid taxes before hand. ...read more.

As healthcare has improved it means people are able to live longer so it could be considered that only the very old are those who are dependant on the NHS or housing, as people aged 65-70 can be classified as economically independent because they are likely to be living of their savings meaning they aren?t as reliant on public health sector. To conclude, at one point the elderly will be reliant on pensions, housing and the NHS and to keep up with this demand therefore it will cost the average taxpayer more money, as the working population isn?t equal to the pension claiming elder citizens. This consequently will put massive pressure on housing and the NHS as it will be difficult to cope with such demand, however I think that this problem needs to be tackled by the government before it?s too late as the consequences could be upsetting. ...read more.