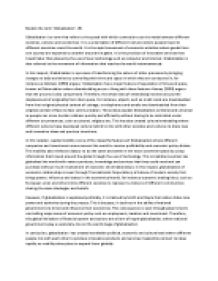 Transfer-Encoding: chunked ﻿Explain the term ?Globalisation?. (9) Globalisation is a term that refers to the speed with which connections can be made between different societies, cultures and economies. It is a unionisation of different cultures where people travel to different countries round the world. It is the rapid movement of economic activities where goods from one country are exported to another around the globe. It is the provision of innovative services that travel faster than planes by the use of new technology such as computer and internet. Globalisation is also referred to the movement of information that reaches the world instantaneously. In this respect, Globalisation is a process of transforming the nature of other processes by bringing changes to daily activities by controlling their time and space in which they are conducted in, for instance as Giddens (1990) ...read more.

These ideas explain Globalisation as liberal and universal as people can cross- border relations quickly and efficiently without having to be controlled under different circumstances, such as cultural, religious etc. This has also created cultural embedding where different cultures have developed culture hybrid to mix with other societies and cultures to share new and innovative ideas and produce inventions. In this relation, capital mobility is one of the impactful features of Globalisation where different companies and investments move around the world to receive profitability and economic policy dictate. This mobility also reinforces labour to do the same and settle in the most convenient place by using information that travels around the globe through the use of technology. ...read more.

However, if globalisation is explained politically, it is claimed by Smith and Doyle that nation states lose power and authority during the process. This is because, it declines in the ability of national governments to direct and influence their economies. This consequence is seen through governments controlling major areas of economic policy such as employment, taxation and investment. Therefore, this global limitation of financial system and actions are a form of hyper-globalisation, where national governments play a secondary role on the world stage of globalisation. In conclusion, globalisation has created worldwide political, economic and cultural web where different people mix with each other to produce innovative products and services meanwhile connect to ideas rapidly so mobility takes place to expand them globally. ...read more.