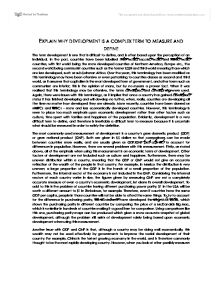 Explain why development is a complex term to measure and define

EXPLAIN WHY DEVELOPMENT IS A COMPLEX TERM TO MEASURE AND DEFINE The term development is one that is difficult to define, and is often based upon the perception of an individual. In the past, countries have been labelled first world, second world and third world countries, with first world being the more developed countries of Northern America, Europe etc., the second world being communist countries such as the former USSR and third world meaning those which are less developed, such as sub-Saharan Africa. Over the years, this terminology has been modified as this terminology may have been offensive or even patronising to countries classes as second and third world, as it assumes that capitalism is the most developed form of government, and other forms such as communism are inferior; this is the opinion of many, but by no means a proven fact. When it was realised that this terminology may be offensive, the terms developed and developing were used. Again, there were issues with this terminology, as it implies that once a country has gained developed status it has finished developing and will develop no further, when, really, countries are developing all the time no matter how developed they are already. ...read more.

For example, in 2004, at least 3400 people were executed in China according to Amnesty International, which is 90% of all known executions worldwide. There are also often poor working conditions, high levels of pollution and laws such as the one-child policy which would be very unpopular in Western society. However, assuming that laws such as the one-child policy are poor is an example of how development is often based on Western ideology: in my opinion, the one-child policy is a large infringement of people's freedom and has many negative consequences. However, the policy is successful in limiting the unsustainable growth of population, which is a global problem. Therefore, China may just be the first country in the world to implement a policy which may eventually be adopted by western countries such as the USA and the UK. Although this is unlikely, it is a possibility, and an example of how the Western idea of development may sometimes affect one's perception of another country's development. In this case, China may be the most developed country in terms of meeting the problem of overpopulation. Indicators other than GDP/GNP can be assessed when measuring development, such as the life expectancy, infant mortality rate, literacy rate, number of people per doctor etc. ...read more.

such as India have proven that it is not impossible to develop, so the theory cannot be completely accurate. The theories put forward by Rostow and Frank show that development is a very complex process which cannot be achieved by some linear equation, and also cannot be easily achieved or prevented. In conclusion, development is a very difficult term to define, as it is largely based upon perception. As well as uncertainty over the best terminology to use, there is also confusion over whether development refers to a country's economic strength alone, or whether it includes the development of society, for example. Clearly, if something is difficult to define it is going to be difficult to measure, as there will be uncertainty over what should be measured in order to find a result. Even more problems arise when you consider how to measure development. Indicators may only look at one aspect of development - usually economic - and are often skewed, therefore they must be used with caution and it is advisable to use more than one indicator in order to get a more accurate idea of a country's development. The UNDP have devised the HDI combining three main indicators, and this is probably the most accurate measure of a country's development that can be used, but still is not perfect. ?? ?? ?? ?? ...read more.