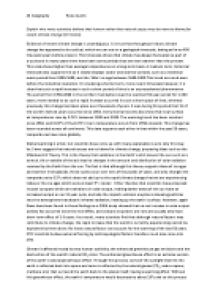 ﻿AS Geography Rosie Austin Explain why many scientists believe that human rather that natural causes may be more to blame for recent climate change (15 marks). Evidence of recent climate change is unambiguous. It is true that throughout history climate change has appeared to be cyclical, which we can see on a geological timescale, dating as far as 400 thousand years before present. This timescale shows that climate has always fluctuated as part of a cycle and in many years there have been some periods that are even warmer than the present. This scale shows higher than average temperatures on a long-term basis. A medium term, historical timescale also supports this as it clearly displays cooler and warmer periods, such as a medieval warm period from 1000-1400, and the ?little? ice age between 1400-1800.This trend occurred even before the industrial revolution. On studying a shorter term, more recent timescale however, it is clear that such a rapid increase in such a short period of time is an unprecedented phenomenon. The period from 1950-2000 in the northern hemisphere was the warmest 50 year period for 1,300 years, more notably so as such a rapid increase occurred in such a short space of time, whereas previously this change has taken place over thousands of years. It was during this period that 11 of the world?s hottest years occurred since 1850. ...read more.

Climate is affected mostly by two human activities; the enhanced greenhouse gas emissions and the destruction of the world’s natural CO2 sinks. The enhanced greenhouse effect is an extreme version of the earth’s natural greenhouse effect. Through this process, some of the sunlight that hits the earth is reflected back into space and some is reflected by the natural gasses (CO2, water vapour, methane etc.) that surround the earth back to the planet itself, having a warming effect. Without this greenhouse effect, the earth’s temperature would decrease by about 18°c and so this process is vital in the maintenance of our planet’s delicate environment. The enhanced greenhouse effect however is the increase in the effectiveness of the process due to an increase in the quantity of greenhouse gases in the atmosphere caused by human activities. This causes the gasses to reflect more of the sun’s rays back to earth as the layer of gasses is thicker, heating the earth further. There is evidence to show that the increase in greenhouse gasses has occurred since 1750, marking it simultaneously with the commencing of the Industrial Revolution. This would make sense as it was with the Industrial Revolution that the world saw the large scale burning of fossil fuels to provide energy for industrial activities. ...read more.

At this rate, 50-60% of Arctic ice could be lost by 2100. Approximately 1/3 of human generated emissions are stored in oceans, so with the melting of this ice a huge amount of CO2 is released into the atmosphere. Another example of a sink is plants, as they convert CO2 into organic matter and oxygen through photosynthesis, and are vital in maintaining the balance of gasses in the environment. Rainforests every year help to absorb almost 20% of manmade CO2 emissions; therefore deforestation can be classes as a major contributor to the causes of climate change. Cutting down rainforests faster than they can be replaced has a devastating effect on the carbon emission cycle, producing an extra 17% of greenhouse gasses. Agriculture has also been shown to produce significant effects on climate change, primarily through the production and release of carbon dioxide, methane and nitrous oxides which contribute to the greenhouse effect. Also, when agriculture alters the Earth?s land cover, it can change its ability to absorb or reflect heat and light. Land use change such as deforestation and desertification, together with the use of fossil fuels are the major anthropogenic sources of carbon dioxide. It is impossible to say however that these reasons are solely to blame for climate change, as there may be other factors that are unknown to us currently, and different scientists have different view to the extent that each factor contributes to this effect. ...read more.