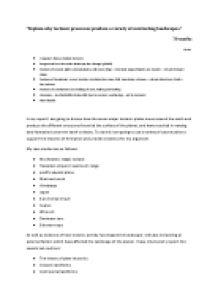 ﻿?Explain why tectonic processes produce a variety of contrasting landscapes.? 70 marks PLAN: 1. Wegener?s theory of plate tectonics 2. Pangea and how the earths landscape has changed globally 3. Features of oceanic plates: abyssal planes; mid ocean ridge ? mountain ranges/islands; sea mounts ? volcanic hotspot chains 4. Features at boundaries: ocean trenches at subduction zones; fold mountains; volcanos ? volcanic island arcs; faults ? San Andrea?s 5. Features of continental crust: folding of curst; Folding and faulting 6. Intrusions ? tors/batholiths/dykes/sills (due to erosion/ weathering) ? not by tectonics! 7. Flood basalts In my report I am going to discuss how the seven major tectonic plates move around the earth and produce the different structures found at the surface of the planet, and have resulted in varying land formations over the earth?s history. To do this I am going to use a variety of case studies to support the theories of formation and provide evidence for my argument. My case studies are as follows: 1. Mid Atlantic ridge/ Iceland 2. Hawaiian emperor seamount range 3. pacific abyssal plane 4. Marinas trench 5. ...read more.

As the pacific plate has moved over the hotspot, gradually new islands and volcanos have been formed directly above the mantle plume as the older volcanos have drifted too far from the source of magma and become extinct. Continental landforms Where the convection currents drag the earth?s tectonic plates down into the mantle, the older and therefore colder and denser oceanic crust begins to subduct beneath either the more buoyant continental crust or the less dense oceanic crust. At the point where the two plates make contact the downward flexure forms a trough, known as an ocean trench (geology.com). The Mariana Trench is the deepest ocean trench on planet earth stretching 2,550 km and is only 69km wide. It marks the convergent boundary where the Pacific plate subducts beneath the Mariana plate. The trench reaches depths of down to 35,840 feet below sea level at Challenger Deep, which is the deepest part of the ocean. This subduction not only causes huge crevasses in the ocean floor but also shapes the land above sea level. Where the denser plate subducts it undergoes partial melting, where some of the plate is heated and rises to the surface directly above the site of melting. ...read more.

Roughly 250 million years ago the earth experienced the largest volcanic eruption in the history of the planet. At the end of the Permian, the Siberian traps fissure volcano thought to be fuelled by a mantle plume erupted 1 ? 4 million km3 of basaltic lava, enough to cover the whole of Europe in only 200,000 years (University of Rochester 1991). Conclusion To conclude, tectonic processes produce a variety of landscapes around the planet, which can be on a global (Pangea); national (the collision of India with Asia); or a local scale (the formation of folding in the Troodos Mountains, Cyprus). They result from the stresses and pressures the earths ridged lithospheric plates are put under from their movement on the asthenosphere, by convection in the mantle. These stresses and strains cause the tectonic plates to react in different ways depending on the rock?s properties (whether a plate is dense and subducts or buoyant and does not). Although tectonic processes have been important in shaping the earths varying landscapes over millions of years they are not the only influence acting upon the surface structures of the planet, as explained through the affects that igneous intrusions and extrusions have on the landscape formations such as through the erosion of batholiths and sills. ...read more.