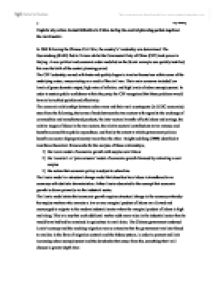 Explain why urban-industrialization in China during the central planning period deprived the rural sector.

Explain why urban-industrialization in China during the central planning period deprived the rural sector. In 1949 following the Chinese Civil War, the country's' leadership was determined. The Guomindang (KMD) fled to Taiwan whilst the Communist Party of China (CPP) took power in Beijing. A new political and economic order modelled on the Soviet example was quickly installed; this was the birth of the central planning period. The CPP leadership moved with haste and quickly began to involve themselves within some of the underlying crises, many existing as a result of the civil war. Their main concerns included low levels of gross domestic output, high rates of inflation, and high levels of urban unemployment. In order to sustain public confidence within the party, the CPP recognized that these problems would have to be tackled quickly and effectively. The economic relationships between urban areas and their rural counterparts (in LEDC economies) stem from the following; the terms of trade between the two sectors with regard to the exchange of commodities and manufactured products, the inter-sectoral transfer of both labour and savings, the relative wages of labour in the two sectors, the relative sectoral contributions to tax revenue and benefits accrued from public expenditure, and finally the extent to which government policies benefit one sector disproportionately more than the other. Knight and Song (1999) identified at least three theoretical frameworks for the analysis of these relationships; 1) the Lewis model of economic growth with surplus rural labour 2) the 'coercive' or 'price scissors' model of economic growth financed by extracting a rural surplus 3) the notion that economic policy is subject to urban bias The Lewis model is a structural change model that describes how labour is transferred in an economy with dualistic characteristics. Arthur Lewis advocated to the concept that economic growth is driven primarily via the industrial sector. The Lewis model states that economic growth requires structural change in the economy whereby the surplus workers who exercise a low or zero marginal product of ...read more.

These limits effectively blocked upward social mobility for most rural citizens; thus locking them into a state of relative poverty, with no feasible, or for that matter, lawful means of escaping to the prosperous urban areas; 'urban workers occupied a privileged position in Chinese society, enjoying higher income greater security, and better social services than did the rural peasants'6. By the 1970s, the system became so rigid that peasants could be arrested just for entering cities. 'The Hukou system of household registration has for decades discriminated against the nation's 800 million rural inhabitants, by depriving them of most of the rights enjoyed by those born in urban areas.7' This FFYEP was implemented in 1953 and was based on the soviet model; its main objective was a high rate of economic growth, with primary emphasis on industrial advance at the expense of agriculture. In order to fund Mao's superpower programme, China exported basic commodities; such as rice and soy beans to Russia. Despite this Mao told his people that it was Soviet aid which was bankrolling the urban- industrialisation. Chou (Mao's right-hand man), however described trade with Russia as 'selling agricultural products to buy machines'. What China was exporting to Russia (and its satellites) consisted predominantly of items that were basic essentials for its own people and included all of the main products from which the population derived its protein. Owing to the fact that china only accounts for 7% of the world's arable land and yet it accommodates 22% of the world's population, land was too precious to raise livestock. As a result the majority of the country could only obtain protein via soy beans, etc. Even though Chinas grain production was terribly inadequate and that china had traditionally been a large importer of grain, it was still astonishingly on Mao's export list. Mao was ready to deprive people of food so that he could export it. ...read more.

In September, the Peoples Daily (Chinese newspaper) reported that the 'biggest rice sputnik' yet had produced over 70 tons from less than a 1/5th of an acre, which was hundreds of times the norm. The sputnik field was faked by an ambitious new county boss in Guangxi. At the end of the year, his county reported a grain output that was over three times the true figure. Such over-reporting was commonplace, and as a result more and more food was being exported, leaving the Chinese population especially the rural population with less and less to survive on and as a result many didn't survive. No one is exactly sure how many people lost their lives during the great leap famine; however, estimates vary from 16.5 million to 40 million, figures which make the great leap famine the largest in history. 'Estimated 30 million peasants died (5.5% of the rural population) as a result of famine'13. Many of those who perished were rural dwellers, offering us further evidence of the deprival effects of Maoist policy in rural china. People unable to search for food due to the rigid Hukou system began to resort to horrific alternatives, most notably cannibalism. Fengyang county in the Anhui province recorded 63 cases of cannibalism in spring of 1960 alone. 'Despite Mao's lifelong dedication to peasant interests, the government eventually became all but deaf to peasant complaints of deprivation'14 Not only did rural china bare the brunt of the famine they also faced the terrible aftermath. Mao's quest for power and world dominance brought widespread suffering and deprivation to the whole of rural China, many were driven to suicide and others forced to murder their children because food was so scarce. Food was scarce because of Mao's selfish and narrow-minded policies. His pursuit of rapid urban-industrialisation culminated in being purely one of military prowess, his dream of making China a superpower under his reign was never realized and millions of people died as a result. ...read more.