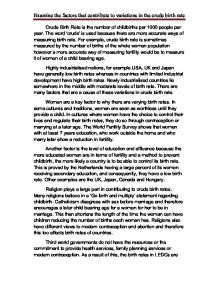 Crude Birth Rate is the number of childbirths per 1000 people per year. The word ‘crude’ is used because there are more accurate ways of measuring birth rate. For example, crude birth rate is sometimes measured by the number of births of the whole women population however a more accurate way of measuring fertility would be to measure it of women of a child bearing age.

Women are a key factor to why there are varying birth rates. In some cultures and traditions, women are seen as worthless until they provide a child. In cultures where women have the choice to control their lives and regulate their birth rates, they do so through contraception or marrying at a later age. The World Fertility Survey shows that women with at least 7 years education, who work outside the home and who marry later show a reduction in fertility.

Another factor is the level of education and affluence because the more educated women are in terms of fertility and a method to prevent childbirth, the more likely a country is to be able to control its birth rate. This is proved by the Netherlands having a large percent of its women receiving secondary education, and consequently, they have a low birth rate. Other examples are the UK, Japan, Canada and Hungary.

Religion plays a large part in contributing to crude birth rates. Many religions believe in a ‘Go forth and multiply’ statement regarding childbirth. Catholicism disagrees with sex before marriage and therefore encourages a later child bearing age for a woman for her to be in marriage. This then shortens the length of the time the woman can have children reducing the number of births each woman has. Religions also have different views to modern contraception and abortion and therefore this too affects birth rates of countries.

Third world governments do not have the resources or the commitment to provide health services, family planning services or modern contraception. As a result of this, the birth rates in LEDCs are still high whilst most MEDCs have a low birth rate due to their economic development. The W.F.S estimate that only 270,000,000 of the 900,000,000 couples in the world are using modern contraception and so it is understandable why there is such a rapid growth in the world’s population.

In less developed countries, children are seen as part of the work force and therefore sometimes contribute to the family through work as young as 3years old. This then results in a large number of births. In developed countries, there is a difference of opinion and women are seen as a financial burden. This is proved by the American survey that suggests the upbringing of a child costs around $100,000 and this results in a lower number of births.

Many countries have different government policies towards childbirth and children. Some encourage family planning and delayed first births whilst some have tried to increase the birth rate. China, for example, had a one child policy which has now been extended to two; however it still must be adhered to. The UK are pro-natalist as they have child benefits taxes and are allowing longer maternity leaves, as well as introducing the option of the mother returning sooner and the father having some paternity leave. France is also pro-natalist as they have encouraged child birth, as are Hungary, who banned access to contraception and abortion in attempt to increase birth rate.

Finally, modernisation and economic development are a major factor that has a large influence on crude birth rates. The adoption of western lifestyles can lead to traditional practices being forgotten about when it comes to childcare and marriage. An example of traditions wearing off is in African societies, couples used to delay sexual relations however it is breaking down and resulting in an increase in fertility for example, in Kenya.