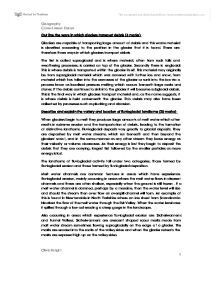 Out line the ways in which glaciers transport debris (5 marks) Glaciers are capable of transporting large amount of debris and this waste material is classified according to the position in the glacier that it is found. There are therefore three ways in which glaciers transport debris. The first is called supraglacial and is where material, often from rock falls and weathering processes, is carried on top of the glacier. Secondly there is englacial. This is where debris is transported within the glacier itself. This material may originally be from supraglacial material which was covered with further ice and snow, from material which has fallen into the crevasses of the glacier or sunk into the ice via a process know as localised pressure melting which occurs beneath large rocks and stones. If the debris continues to sink into the glacier it will become subglacial debris. This is the final way in which glaciers transport material and, as the name suggests, it is where debris is held underneath the glacier. This debris may also have been collected by processes such as plucking and abrasion. Describe and explain the variety and location of fluvioglacial landforms (20 marks) ...read more.

Varves are layers of sediment which are deposited in pairs with each set representing a year's deposition. They are found in the bottom of proglacial lakes. As the melt water stream enters the lake energy is lost and so the sediment is deposited. The width of the band (varve) which is deposited tells us whether it was formed in the summer or winter months. If the band is wide we know that the deposition occurred during the summer months as there are large amount of melt water which allow the streams to carry courser material (such as sand and gravel). During the winter months, when there is little melt water, the size of the sediment is limited to silt and clay which results in the bands being thin and fine. Studies have been conducted into the Varves looking at climate change, with thicker bands being a sign of warmer climates. The colour of the bands can also be an indicator of the climatic conditions with darker sediment thought to be more organic matter and so being a sign of more organic matter and a warmer climate. During ice retreats kettle holes may form as dead ice becomes detached. ...read more.

Kame terraces can be found in valley called Kingsdale in the Yorkshire Dales, where one terrace extends for around two kilometres along the north side of the valley and is approximately two meters high for most of its length. The final landform which is formed by fluvioglacial processes is Braided Streams. These are river channels which are subdivided by numerous islets and channels, where debris laden streams loose water at the end of the melting period and so can carry less material. This material is deposited in the channel causing it to divide and then in some cases rejoin. Over time the bars produced will become stabilised by vegetation and then become more permanent features. The bars which are left unvegetated lack stability and can be moved and re-formed during floods and high periods of discharge. On the outwash plain of Iceland in the S�lheimasandur region braiding occurs widely. Much like glacial deposits, fluvioglacial deposits are often difficult to identify when out in the field, and repeated advance and retreat can modify and alter the appearance of the landforms. Weathering, erosion and colonisation will also have an affect on the landforms. ?? ?? ?? ?? Geography Cover Lesson Essays Olivia Knight 1 ...read more.