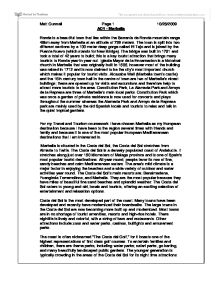 AO1 - Marbella Ronda is a beautiful town that lies within the Serran�a de Ronda mountain range 48km away from Marbella at an altitude of 739 meters. The town is split into two different sections by a 100 meter deep gorge called El Tajo and is joined by the Puente Nuevo (which stands for New Bridge). The bridge was built in 1751 and took a total of 42 years to build; this is a key tourist attraction that brings many tourists to Ronda year in year out. Iglesia Mayor de la Encarnacion is a historical church in Marbella that was originally built in 1505, however most of the building was raised in 1712 and is now claimed to be the city's most important church which makes it popular for tourist visits. Alcazaba Wall (Marbella town's castle) and the 16th century town hall in the centre of town are two of Marbella's nicest buildings; these are opened up for visits and excursions and therefore help to attract more tourists to the area. Constitution Park, La Alameda Park and Arroyo de la Represa are three of Marbella's main local parks. Constitution Park which was once a garden of private residence is now used for concerts and plays throughout the summer whereas the Alameda Park and Arroyo de la Represa park are mainly used by the old Spanish locals and tourists to relax and talk in the quiet tropical gardens. For my Travel and Tourism coursework I have chosen Marbella as my European destination because I have been to the region several times with friends and family and because it is one of the most popular European Mediterranean destinations that I am interested in. ...read more.

The mountains climb to 300 metres above sea level and provide spectacular views of the 23km coastline and the resort itself where tourists are able to escape the busy atmosphere and experience the tranquil environment. There are many harbours within the region that Marbella is based in because of the high tourism demand for cruises and yachts. Marbella's Puerto Banus harbour has became Europe's playground for the rich and famous over the years with its big yachts and fancy cars and as a result has gained a reputation that makes it one of the most famous harbours in Europe. Marbella town has its own marina which has 337 moorings whereas Puerto Banus's marina just along the coast has a whopping 915 moorings and therefore helps to create a very wild nightlife with a range of casinos, pubs and clubs. Other destinations that have thriving harbours along the coastline are: Estepona, Fuengirola, Benalmadena, Malaga and Torremolinos. The rivers and streams within and surrounding Marbella are mainly short in distance, run into the Mediterranean Sea or have been grounded by land, however out of the existing ones the most important ones are Guadalmina, Gaidaiza and Verde y Real. Concepcion reservoir, Pantano Nuevo and Viejo y Medranas are some of the dams within the area, these provide some spectacular views and therefore attract many sight seeing tourists. Marbella Marina and Seafront The old town of Marbella is enclosed by a 9th Century Arab fortress and is very historical with buildings dating back to the 16th Century. ...read more.

Due to the Mediterranean being non tidal and the Atlantic being tidal it produces a renewal of water and as a result increases the sea temperature, this in time causes the resort to experience higher temperatures. The resort is located right on the coast, this helps keep the winters mild because the sea retains the heat for much longer and therefore the land within close range of the sea will be warmed. Throughout the summer the land heats up faster than the sea and the opposite happens, this means the sea has a cooling effect. Climate Graphs Given below are graphs of the Average Temperature (�F) and average precipitation (inches) throughout the year at Marbella. The reason for the significant fall in the precipitation graph is that there are consistent high temperatures that do not condense enough for clouds to form and therefore causes a high humidity with very low precipitation in the summer months. The climate of Marbella encourages tourism both in the winter and the summer. The hot summer climate encourages people who do not mind or want hot sunny weather whereas the mild winter climate encourages more elderly tourists. Even though the climate is not as warm and sunny at that time of year it is still warm compared the UK's winter and lots of elderly people like to get away from the cold winter. As a conclusion it is clear that the resort's climate is a huge influence on the number of tourists that go there and therefore is one of the main reasons to why it has became so popular over the years. ?? ?? ?? ?? Matt Gunnell Page 1 10/28/2009 ...read more.

A good review of a wide variety of different factors responsible for making Marbella a popular tourist destination. Some appropriate images - but adding more labels or annotations would make them relevant and useful. Overall, it is descriptive. In some cases with a lot of detail and specific facts and stats, but it needs more explanation and analysis - eg. what people would be attracted to each thing, why this is a benefit, any conflicts that may occur, how it enables more tourists to go there, why tourism might be being encouraged.