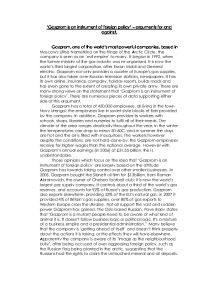 'Gazprom is an instrument of foreign policy arguments for and against. Gazprom not only provides a quarter of Europe's gas supplies, but it has also taken over Russian television stations, newspapers.

‘Gazprom is an instrument of foreign policy’ – arguments for and against.

Gazprom, one of the world’s most powerful companies, based in Moscow's Ulitsa Nametkina on the fringe of the Arctic Circle, the company is seen as an ‘evil empire’ to many. It began in 1992, when the former ministry of the gas industry was re-organised. It is now the world’s third largest corporation, after Exxon Mobil and General electric. Gazprom not only provides a quarter of Europe's gas supplies, but it has also taken over Russian television stations, newspapers. It has its own airline, insurance company, holiday resorts, builds roads and has even gone to the extent of creating its own private army. There are many strong views on the statement that ‘Gazprom is an instrument of foreign policy’. There are numerous pieces of data supporting either side of this argument.

Gazprom has a total of 430,000 employees, all living in the town Novy Urengoi; the employees live in soviet-style blocks of flats provided by the company. In addition, Gazprom provides its workers with schools, shops, libraries and nurseries to fulfil all of their needs. The climate of the area ranges drastically throughout the year, in the winter the temperatures can drop to minus 50-60C, and in summer the days are hot and the air is filled with mosquitoes. The workers however despite the conditions, are not hard-done-by; the Gazprom employees receive far higher wages than the national average. However with Gazprom’s annual earnings (in 2006) at £31.55 billion, this is understandable.

Those opinions which focus on the idea that ‘Gazprom is an instrument of foreign policy’ are largely based on the attitude Gazprom has towards taking control over other smaller businesses. In 2005, Gazprom bought the Sibneft oil firm for $13billion, from Roman Abramovich, the owner of Chelsea football club; it is now the world’s largest gas supply company. It controls about a third of the world’s gas reserves, and accounts for 92% of Russia’s gas production. Gazprom also exports elsewhere, providing 25% of the EU’s natural gas, in 2007 it provided 4% of Britain’s gas supplies, over 80% of gas exports to Western Europe cross the Ukraine. Not all support the vast and sudden power Gazprom has gained. The Oslo based Russian, Pave Baev states that "Gazprom is a mutant people need to be aware of what kind of animal it is. It doesn't follow business logic or political logic. It's a mixture of a business empire and a presidential administration.” Many believe that the company is ‘getting ahead of itself’ and doesn’t think properly about the actions it is taking, or the effects they will have elsewhere. Apparently the company is aware of its ‘image as the neighbourhood bully’, after being accused of over aggressing foreign policy, such as the Russian flag being planted in the arctic, suggesting that the Russians had the rights to claim the untouched mineral and oil deposits. Edward Lucas the Eastern Europe correspondent for The Economist magazine states that "This is not a normal company; this is the economic arm of a powerful state” and that Gazprom marriage of economic and political power is particularly threatening. "It used to be tanks and submarines and missiles that we were frightened of, now it should be banks and pipelines, and Russia has made tremendous strides in consolidating its monopoly of gas exports." Lucas states that the company Gazprom is increasing in power and threatening those with less power, this suggests that the company is being used as an instrument of foreign policy by Russia. Russian critics agree that it is being used as an economic weapon, "Gazprom is an instrument of Russian foreign policy, like American oil companies are instruments of American foreign policy."

A report titled ‘Don’t blame Gazprom for Europe’s Energy Crunch’, it states that the company has gained a bad reputation, but that ‘It’s not Gazprom’s fault that Europeans want to consume more gas than they have.’ In addition to this, disagreeing with the statement that Gazprom is being used as an instrument of foreign policy is James Fenkner, an investor in the stock exchange in Moscow, who runs ‘Red star fund management’. He is pleased with Gazprom and says that ‘Gazprom’s strong grip on the Russian market makes it an attractive investment, to be linked as a company to the Russian government, it doesn't necessarily have to be evil.” These views oppose the statement that Gazprom is used as an instrument of foreign policy, that it is simply a successful company, and that any other problems are not its fault or responsibility to take care of.

In conclusion, both opinions on the statement that Gazprom is an instrument of foreign policy can be seen as true. It is undoubtedly a company which has grown from strength to strength, knocking down other, smaller and less successful companies on its way, so that it can shine in its full glory. Gazprom has clearly caused some negative knock on effects, and taken such vast amounts of control in Russia and even further, that some feel threatened due to it’s new status, however it can also be agreed that it is simply a company which has done very well at what it does, and has been lucky. Therefore Russia has done what most countries would do and use this new success to their advantage, whether this means it is being used as an ‘instrument for foreign policy’ or not.