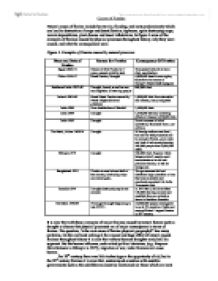 Causes of Famine Natural causes of famine include heavy rain, flooding, and most predominantly which can lead to destruction of crops and desertification, typhoons, again destroying crops, vermin depredations, plant disease and insect infestations. In figure 3 some of the examples of famines caused by physical processes throughout history, why they were caused, and what the consequences were. Figure 3. Examples of Famine caused by natural processes Place and Date of Famine Reason for Famine Consequence Of Famine Egypt 1064-72 Failure of Nile Floods for 7 years, caused unfertile land Thousands believed to have died, cannibalism China 1333-37 Great Famine, Drought 4,000,000 dead in one region; believes to be source of Europe's Black Death (plague) Northwest India 1837-38 Drought, locust, as well as war and migration of starving people 800,000 died. Ireland 1845-49 Great Potato Famine caused by Potato Blight (diseased potatoes) 1,000,000 died from starvation and disease, many emigrated India 1866 Poor distribution of Rainfall 1,500,000 died India 1899 Drought 1,250,000 starved, including effects of disease 3,250,000 died India 1965 Drought Due to success of relief operations, thousands died , not millions The Sahel, Africa 1968-74 Drought 30 foreign nations sent food , but aid was badly handled due to corrupt officials , poor roads and lack of advanced planning. 500,000 people died 3,000,000 cattle. Ethiopia 1973 Drought 100,000 died. Emperor Haile Selassie didn't want to spoil tourist trade so he did not publicize famine, or ask for foreign aid. Bangladesh 1974 Floods covered almost half of the country, destroying crops and stored grain. The government did not distribute large quantities of rice that were available and merchants exported it to India. Thousands died. Somalia 1974 Drought destroyed people and animals In 1975 the U.S.S.R airlifted 120,000 starving nomads and resettled them on collective farms in Southern Somalia. The Sahel 1983-85 Prolonged drought beginning in late 1970's 22,000,000 people endangered in up to 22 countries. ...read more.

They done nothing and this bad management caused famine. * Non-government organizations such as Food For Work (FFW) distributed maize to 2million people, mostly those without cash or resources. * In return the people (mostly women) worked on self-help schemes such as road repair and school building, while the men engaged in income earning activity The case study above gives a perfect example of how much a drought can affect a country the people in it, but with good management from the government, a famine which would have been caused due to this physical process can be avoided, even in less developed countries. This case study compared to the aforementioned Ethiopia famine which was a drought but due to bad management by Emperor Haile Selassie it tuned into a famine killing 100,000. Zambia could have gone the same way but was managed well, and few died, which gives a strong argument against the notion of physical processes being the core reason for famine. Figure 7. Shows rainfall for 1991-92, 1992-93 and the 30 year mean in different regions of Zambia. Figure 8. Shows the areas in Africa affected by drought 2002-3 A Closer Look at a Human Cause of Famine Having examined a predominant natural process which can cause famine it is now necessary to examine a human cause. One of the principal causes is desertification; the diminution or destruction of the biological potential of the land, often resulting in 'desert' like conditions. It is caused by human and natural processes but it is the human processes which make it desertification and cause famine. Figure 9. Explains what desertification is. Figure 9. Desertification What Is Desertification? Desertification is 'land degradation in drylands resulting from human actions' It is the loss of soil and its productivity in arid and semi arid (less than 250mm rainfall per year) regions of the world because of overuse by man. ...read more.

Further Consequences * The pandemic of AIDS which came to knowledge in the 1980's has given a new type of famine. It has reacted with the famine due to drought and civil war and given a famine that is 'out of control.' * The UN says 300million people in Africa (51% of sub-Saharan pop.) live on less than one dollar a day. * The World Bank estimates this to rise to 345million by 2015. * Renny Nancholas of Red Cross said "no one organization is ever going to dent such a huge crisis." * In Zimbabwe the government has devastated agriculture by seizing farms in violent land reform. Fertile land lays fallow - 7million people are in danger of starvation. Foreign Aid * In Chimbombo, 55 miles north of Lusaka, Zambia's capital, a US- government sponsored aid group the Cooperatie League Of The USA teaches subsistence farming techniques for dealing with drought and increasing crop yields. * 500 of the farmers have increased their yield fivefold. * Humanitarian groups all over Africa use food-aid to pay for agricultural improvements, and try to maintain farming. * "We need a unified strategy and we don't have one." - Brenda Cupper, program director for the aid group CARE. Figure 16. The effect of AIDS on life expectancy in selected African countries compared to life expectancy changes in developed countries. 1970 1998 Males Females Males Females Zambia 46 49 36 36 Uganda 45 49 39 40 Zimbabwe 50 53 36 36 1970 1998 Males Females Males Females Japan 71 76 77 83 Italy 69 75 75 82 UK 69 75 74 79 USA 68 75 73 79 Figure 17. Graph shows the declining life expectancy in selected sub-Saharan countries compared to the increasing life expectancy in developed countries. What these statistics and graph show is the clear difference in movement of life expectancy. The underdeveloped countries which face problems of drought, famine, and AIDS find there life expectancy rates rapidly deceasing, while developed countries that do not face such pressures find there life expectancy rates steadily rising. ...read more.