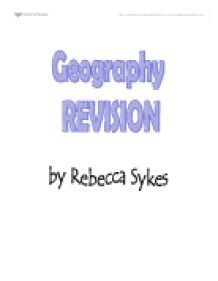 In flood it erodes more because it has more energy. Lower course - It has a wide flat valley, and a large river, with large bends, called meanders, these may form into oxbow lakes. Lateral erosion (sideways) occurs. Higher gradient = Faster river Deeper river = less friction = Faster river Wide river = less friction = Faster river Centre of river = Less friction = Faster flow Erosion in a river Corrasion / Abrasion Particles of rock are transported, and thrown against the banks and bed, knocking away more rock and so eroding, mainly down Hydraulic Action River water travelling very fast has enough energy to wear the channel away by its sheer force Solution / Corrosion Water may dissolve soluble rock of its channel, for example, if the rock is limestone (Calcium Carbonate) Attrition River particles knock against each other, breaking bits off each other, so they become smaller and more rounded Features V-shaped valleys River floods, and transports material, material cuts downwards, the vertical erosion occurs when heavy rain causes weathering, so this is slower, leading to a valley with interlocking spurs. Pot holes A stone gets trapped in a hollow on a stream bed, and is whirled around by the force of the water, deepening the hole Waterfalls Soft rock is eroded, and hard rock is undercut, the hard rock collapses, and the plunge pool deepens, and the waterfall recedes. Another way is if a pot hole becomes deep, and rock is eroded and recedes, or an earthquake fault. Meanders Fastest flow round a bend is on the outside, and here material is eroded, on the inside, material is deposited, this pushes the bend outwards. In an area where there are two bends, this means the bends become closer, and join to form an OX-BOW lake, the old river course is cut off, and used during flood time. Eventually it becomes covered in vegetation. ...read more.

Revetment - Steel posts which reduce wave energy, may reduce shipping, but not too expensive OR a sloping carpet like concrete wall laid like carpet along the cost, also quite expensive 3. Gabions - Mesh baskets filled with stones, that eventually become grass covered, they are cheap and effective, but ugly at first 4. Groynes - Trap sand, reducing erosion, expensive but effective, can increase tourist appeal 5. Rip-rap - Man made boulders which break up the waves, are quite expensive, but attractive and popular, although can cause injury 6. Beach Rebuilding - This has to be done regularly, but is cheap and popular with tourists, having little or no effect down the coast 7. Offshore breakwater - Protects the shore from all waves, located off shore, may cause shipping problems It is also difficult because it require co-operation between counties, and effects places downstream. Transportation occurs along beaches in the form of longshore drift, in the direction of the prevailing wind. Material is pulled up the beach by swash, and dragged diagonally forward and down by backwash, due to gravity. Shingle beaches are steeper with larger shingle and pebbles at the top, sandy beaches are gentler with fine sand at the bottom. When there are coastal directional changes, material may be deposited, this can lead to the formation of a spit, a jutting built up area, poking out to sea. Different wind directions lead to different curves, and hooks. Sand bars occur in river estuaries when sand is deposited, leading to a bar of land parallel to the estuary, which slowly moves inland, such as at Slapton. A tombolo occurs when a sand bar connects an island and the mainland, such as between Weymouth and Portland. Topics Revised Casestudies Revised Casestudies Revised Casestudies Learnt Water Industry Retail Life Quality Farming Settlements Populations Rainforests Energy Plate Tectonics Coasts Hope this is useful please don't try and pass it off as your own work! This is the work of Rebecca Anna Kate Sykes form UK Peterborough and it took me hours (it also got me an A* at GCSE Geography!) ...read more.