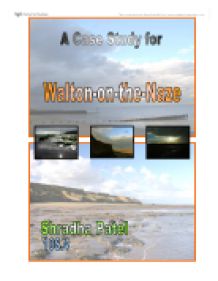 Location Walton-on-the-Naze is one of Britain's traditional seaside towns. It is located in the South-East of England and it is on the North point of the Tendring Peninsular on the Essex Coast. It is bordering the North sea. To be located it is situated North of London and just to the south of Harwich. Walton-on-the-Naze has a very popular seaside with tourists and a great outdoor resort. The Problem This is an area on the coast that is under constant erosion from the sea. The sea reaches the beach by long shore drift and erodes the cliff by weathering, hydraulic action and abrasion. The cliff is being eroded back and this means land and buildings will be lost. The land is of high economic value a it has houses and shops on it. ...read more.

The cliffs at Walton have layers of different materials. The bottom one is London clay and is impermeable, which means water cannot soak through it. The middle layer is Red Crag and is made of silt and sand. The top layer is wind-blown sand. The top two layers are permeable, which means water can soak through them. This makes the cliff less stable so 'slumping' occurs. The edge of the cliff slips away from the top of the cliff. The tide can then wash the fallen debris away into the sea. Solutions Some of the methods of protection that have been used include a sea wall, a riprap, groynes and a permeable groyne as well as improved drainage. However, the area of cliff where the Naze Tower is situated is being greatly eroded by the sea and weather. ...read more.