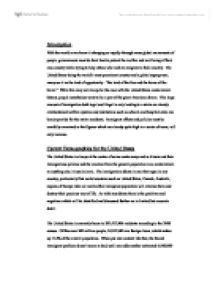 Global Community and Immigration in the United States

Introduction With the world as we know it changing so rapidly through mass global movements of people, governments must do their best to protect the welfare and well being of their own country while trying to help others who wish to emigrate to their country. The United States being the world's most prominent country and a global superpower, many see it as the land of opportunity - "the land of the free and the home of the brave." While this may not always be the case with the United States controversial history, people nonetheless want to be a part of the great American dream. This large amount of immigration both legal and illegal is only leading to a strain on already overburdened welfare systems and institutions such as schools and hospitals who can barely provide for the native residents. Immigrant effects and policies must be carefully examined or the figures which are already quite high in a series of areas, will only increase. Current Demographics for the United States The United States is always at the centre of some controversy and as it turns out their immigrations policies and the reaction from the general population is as controversial as anything else it lays claim to. The immigration debate is one that rages in any country, particularly first world countries such as United States, Canada, Australia, regions of Europe who are worried the immigrant population will overrun them and destroy their precious way of life. As with any debate there is the positives and negatives which will be identified and discussed further on in limited but accurate detail. The United States is currently home to 281,421,906 residents according to the 2000 census. Of this near 300 million people, 30,522,685 are foreign-born, which makes up 11.2% of the overall population. When put into context like that, the feared immigrant problem doesn't seem as bad, until one adds another estimated 6,500,000-7,000,000 illegal immigrants. ...read more.

The motivation behind the idea to change policies on immigration and so forth is that the increasing number of immigrants and natives living in poverty will lead to a public backlash on programs that are already unpopular. The government must also keep the outlays on such programs steady, but with the vastly increasing population that means each recipient will receive less so that the overall cost of the program remains the same. This clearly is not in the interest of the poor that already exist. Other institutions such as hospitals, schools and charities also become immensely overstretched taking care of low-income or at-risk children from an increasing number of poor immigrant families. "Increasing the number of people below or near poverty through immigration is clearly counter-productive." (Camarota -Care) Poverty Due to Race Among other indicators race is an important factor in examining the poverty status of households. Reports show that the Hispanic origin (being so close geographically) have the highest rate of poverty with white and Asian immigrant households have the lowest. "Poverty among immigrants increased in the 1990s for all major racial groups except Asians. Moreover, with the exception of blacks, persons in immigrant households have higher poverty rates than persons of the same race living in a native household. This gap widened in the 1990's for all racial groups with the exception of Asians." (Camarota - Findings) Speculatively speaking, the high poverty rate in the Hispanic community may be of concern to studies because the group is very large (as afore mentioned probably due to the close geographical positioning) and it may take three or four generations for the descendants of these immigrants to reach a standard and equal economic correlation with natives. "The very high poverty rate associated with native-born Hispanics suggests that this is the case. Current immigration may well be creating a new underclass of Hispanics in America. At the very least, immigration policy may be setting the stage for sizeable ethnic differentials in economic outcomes that are likely to play an important, social, economic, and political role throughout the next century." ...read more.

While often these children are being adopted into 'white' families that are relatively well off, for the time that they are perhaps not adopted, they are still people that need to be taken care of, possibly with the use of state funds which provides yet another small, but definitely increased burden to an already overstrained, overused system. Conclusion As can be seen from statistical figures an study reports, or a simple walk through most large American capitals - immigration is causing quite a high burden on the social and economic welfare system. While it is believed to have a part in the crime rate (as any low socio-economic grouping is) it stretches further with cultural differences and the formation of gang groups and so forth. The American population is footing the bill for programs which are far exceeding the cost of many other programs which are highly unpopular thus far. Overall, America needs to examine the effects more closely and decide what can be done with the poor and the street people of American society both native and immigrant before any change can occur. 1 - http://www.comptons.com/encyclopedia/ARTICLES/0175/01863168_A.html Compton's Encyclopedia Online v3.0 (c) 1998. The Learning Company, Inc. "United States History" 2 - http://www.ncpa.org/pd/immigrat/pdimm/pdimm14.html (NCPA - General Archive, author unknown) "NCPA - Immigration Issues - Alexis de Tocqueville Institution: Immigration Creates Economic Growth (Summary)" 3 - http://cis.org/articles/poverty_study/whycare.html Steven A. Camarota "Importing Poverty - Why Care About Poverty Caused by Immigration?" 4 - http://cis.org/articles/poverty_study/whycare.html Steven A. Camarota "Importing Poverty - Findings" 5 - http://www.theatlantic.com/unbound/flashbks/immigr/rip.htm William Z. Ripley "Races in the United States - December 1908" 6 - http://www.fairus.org/html/042us604.htm FAIR - general archive "FAIR - Immigration Affects the Whole Country" 7 - http://travel.state.gov/orphan_numbers.html International Adoption Archive. "Immigrant Visas Issued to Orphans Coming to U.S." 8 - http://www.usatoday.com/usatonline/20010723/3502675s.htm Laura Parker "USA just wouldn't work without immigrant labor Demand will continue to grow for high- and low-skilled." Global Community Student: Ria Allenberg Student ID: 2050453 Tutor: Xiaoli Jiang Tutorial: Tuesday 9:30-10:30 Exercise - 2500 word essay Due Date: Friday2nd November. Word Count: 4228 (including quotes and table) Appendix A - International Adoption Agency Figures ?? ?? ?? ?? ...read more.