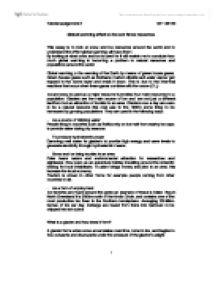 Global warming effect on Ice and Snow resources This essay is to look at snow and ice resources around the world and to understand the effect global warming will have them By looking at what snow and ice is used for it will enable me to conclude how much global warming is becoming a problem to natural resources and populations around the world. Global warming,Is the warming of the Earth by means of green house gases. Green houses gases such as Methane; Carbon dioxide and water vapour get trapped in the ozone layer and break it down. This is due to the chemical reactions that occur when these gases combine with the ozone (O3) Ice and snow is used as a major resource it provides four main resources to a population. Glaciers are the main source of ice and are not just a different landform but an attraction of tourists to an area. Glaciers now a day are seen to be a natural resource like coal was in the 1950's some thing to be harnessed by growing populations. They are used in the following ways - As a source of drinking water People living in countries such as Bolivia rely on ice melt from nearby ice caps to provide water during dry seasons - To produce hydroelectric ...read more.

Internal deformation occurs when the weight and mass of a glacier causes it to spread out due to gravity. Sliding occurs when the glacier slides on a thin layer of water at the bottom of the glacier. This water may come from glacial melting due to the pressure of the overlying ice, or from water that has worked its way through cracks in the glacier. Glaciers can also readily slide on a soft sediment bed that has some water in it. Basal slip may account for most of the movement of thin, cold glaciers on steep slopes, or only 10 to 20 percent of the movement of warm, thick glaciers lying on gentle slopes. Glacier melt and ablation resulting from increasing temperature, evaporation and wind scouring. Ablation is a natural and seasonal part of a glacier's life. As long as snow accumulation equals or is greater than melt and ablation, glacier health is maintained. Ice - At any one time almost 4/5 of all fresh water is frozen solid as ice examples of these landforms: Mountain Glaciers, Polar ice sheets, icebergs etc Melt water - Rising temperatures in spring melt ice and snow on higher ground, producing a serge of water into rivers. ...read more.

This will enable to Earth to warm as the Earth will absorb more radiation and the sea will heat up. The heating up of the Earth will eventually melt snow and glaciers, which will run into rivers and turn into under ground flow. This will decrease the albedo effect as less of the Earth's surface will be covered with reflective areas (as they would have melted) more radiation will be absorbed by the Earth and everywhere will heat up. Or This effect will happen and cause the ozone layer to deplete due to CFC's that are still around and green houses gases building up more and more as we use more of the reducing resources of coal and oil and allow more short wave radiation to hit the Earth. But instead of heating the Earth the radiation will be reflected straight back out into space, as we now have no blanket or net to catch the radiation which gives Earth its unique atmosphere. This effect will cool the Earth and more ice and snow and glaciers will occur. This is mainly due to the fact it will become so cold another ice age will occur and the human race will decrease. ...read more.