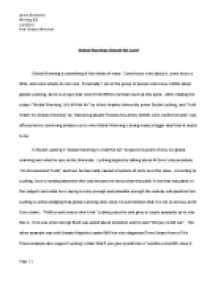 Global Warming: Should We Care? Analysis of two sceptical articles.

﻿James Broderick Writing 101 11/15/12 Prof. Brooks Winchell Global Warming: Should We Care? Global Warming is something of the minds of many. Some know a lot about it, some know a little, and some simply do not care. Personally, I am in the group of people who know a little about global warming, and it is a topic that I don?t feel effects me that much at this point. After reading the essays ?Global Warming: Is It All Hot Air? by Johns Hopkins University junior Dustin Lushing, and ?Cold Water On Global Warming? by Harvard graduate Thomas Sowell my beliefs were confirmed and I was offered more convincing evidence as to why Global Warming is being made a bigger deal than it needs to be. In Dustin Lushing?s ?Global Warming: Is it all Hot Air? he gives his point of view on global warming and what he sees at his University. Lushing begins by talking about Al Gore?s documentary ?An Inconvenient Truth? and how he has really caused a hysteria of sorts over this issue. According to Lushing, Gore is seeking attention this way because he knows that the public is not that educated on the subjects and what he is saying is scary enough and plausible enough the nobody will question him. ...read more.

They simply do not think the science Gore presents in accurate. He proves that this whole global warming hysteria is bad by the example he sees at his school where students who really do want to help the environment are ?wary of joining a doomsday crusade? so this whole thing has just left a bad taste in everyones mouth. He also makes a logical point by saying that we should be focusing our energy on more important things like the war in Iraq and terrorism. Lushing ends the essay by trying to illicit and emotional response by saying that some global warming crusaders at his school actually turned the Iwo Jima statue at his school into a giant windmill. I believe this was very effective because as it is that last thing you read it makes you think about the issue more even after you have stopped reading. In ?Cold Water on Global Warming? by Thomas Sowell he begins with saying how people are hyping global warming and it is turning into a hysteria. Basically, people do not check their facts and some scientists are not really scientists and those who are not climate experts. ...read more.

Overall, I feel that the better and most convincing essay came from Lushing. He believes that Al Gore is exaggerating the global warming issue to the point where people are hysterical about it. He proves how politicians exaggerate issues by citing Benjamin Ginsburg who is a Professor of politics at Johns Hopkins University. Ginsburg says that Joe McCarthy was going over campaign issues and someone on his staff said ?anticommunism?. ?McCarthy smiles. The rest is history, take a potentially explosive issue and exaggerate the hell out of it?. This quote proves his claim very well. Next, he proves that even scientists do not believe Al Gore and his theories about global warming. Lushing does this by saying that in a recent New York Times article many scientist we quoted as saying that his points were exaggerated. At first, I thought that Lushing should have mentioned the name of the scientist(s) that said this; however I was alright with it because it came from a very reputable source in the New York Times. Finally, he proves the argument by saying what he has observed at his school with students who really do care about the environment are now scared of joining this ?doomsday crusade?. Page | ...read more.