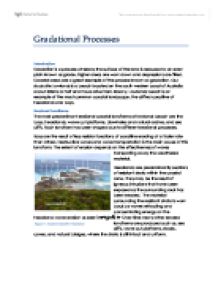 Gradational Processes Introduction Gradation is a process whereby the surface of the land is reduced to an even plain known as grade, higher areas are worn down and depressions are filled. Coastal areas are a great example of the process known as gradation. Our study site Lowlands is a beach located on the south western coast of Australia about 30kms or half and hours drive from Albany. Lowlands beach is an example of the most common coastal landscape, the cliffed coastline of headlands and bays. Erosional Landforms The most predominant erosional coastal landforms at lowlands beach are the bays, headlands, wave cut platforms, blowholes and natural arches, and sea cliffs. Each landform has been shaped due to different erosional processes. Bays are the result of less resistant sections of coastline eroding at a faster rate than others. Destructive waves and wave transportation is the main cause of this landform. The extent of erosion depends on the effectiveness of waves transporting away the weathered material. Headlands are predominantly sections of resistant strata within the coastal zone. They may be the result of igneous intrusions that have been exposed as the surrounding rock has been eroded. ...read more.

Split offshore bars are created when the tide retreats water is funnelled through the gaps that are deepened and widened by abrasion and hydraulic action. Over time the rip currents will decrease in strength as the gap becomes wider and deeper. Weathering Landforms Lowlands beach also has many weathered coastal landforms like caves, pitted or honey combed rock, beachrocks, pinnacles or lapies, and notches. Caves and Pitted or honey combed rock are formed due to sea spray weathering and salt crystal growth. Wind carries salt spray onto rocks where it is absorbed into small pores and cracks within the rocks. There the water evaporates and the salt crystallises, creating pressure and often breaking down the rock. Also at lowland we found evidence of calcium carbonate binding together with other sediments to form beachrock. Pinnacles or lapies are created due to the salt water solution containing carbon dioxide or carbonic acid easily dissolving limestone along the beach. As the limestone rocks are dissolved they leave a network of ridges and pinnacles along the beach which are often very sharp; refer to the eroded boulders in Figure 3. Notches can be formed from many different sources one being the action of marine organisms. ...read more.

But humans take some responsibility by putting signs and bins in place to protect them and the natural environment from further erosion; shown in Figure 4. But not all signs are followed and can lead to death or erosion of the natural landscape. Some other land uses can greatly affect the land. Powerlines could devastate the Lowlands area if they faulted and started a fire on a windy day. Other land uses like fishing could also devastate local fish populations if fishermen don't abide by the fisheries laws and bag limits. Conclusion Lowlands beach is a coastal landscape with coastal landforms created mainly by gradational forces. Processes like marine erosion, deposition, transportation, weathering, and mass movement all contribute to this coastal landscape and its landforms. But influences and land use conflict by human impact also affects how this coastal landscape looks and what you will find within it. If humans can minimize their negative impact, this landscape can be kept sustainable and safe for human activities and animal life. Resources * Coastal Systems field study booklet * Coastal landscapes handout * Weathering handout * The work of waves handout * Human impact on coastal landscapes handout * Field study pictures * Focus questions * http://en.wikipedia.org/wiki/Coastal_geography * http://www.physicalgeography.net/fundamentals/10s.html * http://www.aabarrett.co.uk/coasts/cindex.htm ?? ?? ?? ?? ...read more.