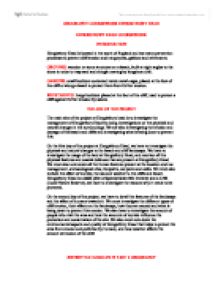 Hengistbury Head is located in the south of England and has many prevention processes to prevent cliff erosion such as groynes, gabions and revetments.

HENGISTBURY HEAD COURSEWORK INTRODUCTION Hengistbury Head is located in the south of England and has many prevention processes to prevent cliff erosion such as groynes, gabions and revetments. GROYNES: wooden or stone structures on a beach, built at right angles to the shore in order to trap sand and shingle moving by longshore drift. GABIONS: small boulders contained inside metal cages, placed at the foot of the cliff or along a beach to protect them from further erosion. REVETMENTS: Large boulders placed at the foot of the cliff, used to protect a cliff against further erosion by waves. THE AIM OF THE PROJECT The main aim of the project at Hengistbury head is to investigate the management of Hengistbury Head by doing investigations on the physical and natural changes in the surroundings. ...read more.

On the second day of the project, we have to detail the features of the landscape and the affect of humans towards it. We must investigate the different types of cliff erosion, their affects on the landscape, how they are caused and what is being down to prevent this erosion. We also have to investigate the amount of people who visit the area and how the amounts of tourists influence the protection and conservation of the site. We also must note down the environmental aspects and quality of Hengistbury Head that helps to protect the area from erosion and pollution by humans, and how weather affects the amount of erosion of the cliff. HUMAN AND NATURAL EFFECTS AT HENGISTBURY HEAD The physical processes that affect the landscape and the erosion of Hengistbury head are the managements of shops and other buildings and sites that attract tourists to the area. ...read more.

Overall a good introduction. However it lacks explanation in places. The answer would also benefit from further maps and diagrams to give evidence for the points made.