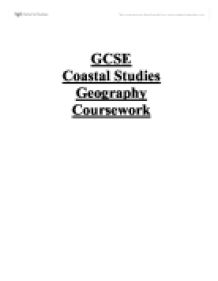 How and Why are Sea Defences being used in North Norfolk?

GCSE Coastal Studies Geography Coursework Introduction How and Why are Sea Defences being used in North Norfolk? The topic I have chosen for my project is on coastal erosion. This is an important topic to study because it affects all the agriculture and inhabitants of the coastal areas. Coastal erosion can take the form of many different problems e.g. flooding, physical erosion on the beaches and general cutting away from the coastal areas. Coastal defence has many different methods to counteract the growing problem of coastal erosion. Such defences like groynes, dumping, gabions, rock armouring, flood embankments, revetments and vertical seawalls. All of these forms of coastal defences are costly and the local council often dislike paying for them if they are considered unreliable. There is a constant threat of coastal erosion because of the green house affect and global warming and the melting of the polar ice glaciers, threatening to raise sea level therefore flooding unprepared or low lying areas. This is a big problem for the UK because it is an island therefore will be more affected. My overall question on this project is the title 'How and Why are sea defences being used in North Norfolk?' and I will be answering this question using the data I collected on my field trip to North Norfolk, this is data from beaches including pictures and measurements on the height and length of the sea defences found on the beaches in North Norfolk. I will answer this question in the form of five sub-questions then I will answer the overall question in the evaluation. 1. How do beach profiles vary? 2. Why do beach profiles vary? 3. Do coastal defences alter the characteristics of the beaches of North Norfolk? 4. How do coastal defences work? 5. How effective are the coastal defences in place? 1. How do beach profiles vary? The meaning of this question is to summarise all my data on the beaches in North Norfolk. ...read more.

This beach is entirely sand and very unsightly in my opinion. This beach is destructive. I conclude that the beaches vary from the way the sea defences are used. 2. Why do beach profiles vary? Weybourne - a destructive but dumping has made it a constructive Sheringham - a destructive Cromer - a destructive Overstrand - a destructive These beaches are mainly destructive because the waves have a long way that they travel without resistance and because of this the waves are very strong and they wipe the beaches of all loose rocks therefore can be very erosive. Sea defences help prevent a destructive beach destroy the effects of these waves. The sea defences are used in many ways as you can see from the pictures in question four. The different defences used on the four beaches in North Norfolk I visited were: * Groynes * Revetments * Seawalls * Rip Rap * Gabions * Beach nourishment (Dumping) 3. Do coastal defences alter the characteristics of the beaches of North Norfolk? The characteristics of the beaches of North Norfolk vary according to the different forms of coastal defences used. They can be very unsightly if there are groynes or rip rap but if there are beach nourishments then this can improve the look of the beach. Weybourne - attractive Sheringham - unsightly Cromer - quite unsightly Overstrand - very unsightly The groynes are large structures of wood or scrap metal and make a beach look messy, they are unsightly and not particularly effective. They alter the beaches look completely and may detract from tourism. The beach replenishing is very effective and not unsightly if the right sediment is used. This form of natural defence is effective and would not detract from tourism. Vertical sea walls are very effective but completely change the characteristics of a beach. This wouldn't detract from tourism but I would give the beach a completely new profile. 4. How do coastal defences work? Please see annotated photographs attached. 5. How effective are the coastal defences in place? Please see annotated photographs attached. ...read more.