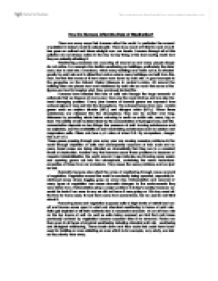 How Do humans Effect The rate of Weathering

How Do Humans Affect the Rate of Weathering? There are many ways that humans affect the world. In particular the amount of pollution in today's world is catastrophic. There is so much of it that to most of us it has gone un-noticed and blows straight over our heads. Humans through all of this pollution do not always notice in the day-to-day living of the fast moving world how they are actually affecting it. Weathering processes are occurring all around us and many people simply do not notice. For example the terrible weathering on buildings, particularly the older ones, due to acid rain. Limestone, which many buildings are made out of, is affected greatly by acid rain and in cities like London where many buildings are built from this rock, we find that areas of it have been worn down by acid rain. A good example is the gargoyles on the Natural History Museum in central London. All around the building there are pieces worn and weathered by acid rain so much that some of the figures are hard to imagine what they previously looked like. ...read more.

of tree roots and so many forest areas are being affected so dramatically that they are in a constant threat of destruction. Another way that humans cause these problems is because of massive industrialisation the world around. Huge factories are throwing away waste and spewing gases out into the atmosphere, containing the same hazardous properties of those from car emissions. They cause the same problems and are just as bad. Secondly humans also affect the rates of weathering through mass removal of vegetation. Vegetation around the world is constantly being uprooted, especially in rainforest areas where logging goes on every day. Deforestation and removal of many types of vegetation can cause dramatic changes to the environments they were taken from. Deforestation plays a major problem in today's society because we would be fools if we were to say we did not know it was going on. We buy wood all the time for home uses; it must have come from somewhere, but we just do not think about it. ...read more.

Consequently, tree vitality and regenerative capability are reduced. Prolonged exposure to acid rain also causes forest soils to lose valuable nutrients. It also increases the concentration of aluminium in the soil, which interferes with the uptake of nutrients by the trees. Lack of nutrients causes trees to grow more slowly or to stop growing altogether. More visible damage, such as defoliation, may show up later. Trees exposed to acid rain may also have more difficulty withstanding other stresses, such as drought, disease, insect pests and cold weather. The ability of forests to withstand acidification depends on the ability of the forest soils to neutralize the acids. This is determined by much the same geological conditions that affect the acidification of lakes. Consequently, the threat to forests is largest in those areas where lakes are also seriously threatened - in central Ontario, southern Quebec, and the Atlantic provinces. These areas receive about twice the level of acid rain that forests can tolerate without long-term damage. Forests in upland areas may also experience damage from acid fog that often forms at higher elevations. ...read more.