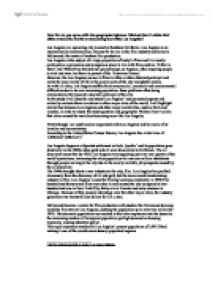 How far do you agree with the geographer/planner Michael Dear's claim that cities around the world are becoming more like Los Angeles?

How far do you agree with the geographer/planner Michael Dear's claim that cities around the world are becoming more like Los Angeles? Los Angeles is a sprawling city located in Southern California. Los Angeles is an internationally renowned area, famous for its role in the film industry and home to Hollywood, the centre of modern film production. Los Angeles is the subject of a large proportion of today's films and it is mostly portrayed as a glamorous and prosperous place to live with films such as 'A Star is Born' and 'What Price Hollywood' glamorising Los Angeles, often inspiring people to visit and even live there in pursuit of the 'American Dream.' However, the Los Angeles we see in films is often a rather distorted portrayal and omits the cruel reality of life in the poorer parts of the city and ghetto culture. As with all cities, Los Angeles suffers from many social, economic and environmental difficulties due to its ever increasing population, these problems often being overlooked in Hollywood's idealistic portrayal of the city. In this study I will describe and assess Los Angeles' less promoted aspects and critically evaluate them in relation to other major cities of the world. I will highlight similarities between Los Angeles and other major world cities, such as Paris and London, in order to assess the study question and geographer Michael Dear's claim that cities around the world are becoming more like Los Angeles. ...read more.

Trevor Phillips, Head of the Commission for the Racial Equality said that Britain becoming more and more segregated and there are particular areas which have the potential to become "fully-fledged ghettos."7 Comparisons have been drawn with the ghettos of Los Angeles illustrating the way in which major cities like Birmingham are becoming or already have become like Los Angeles in their multicultural problems. Britain is much like Los Angeles in its population as well as its racially fuelled conflict. London was the first large city to widely sprawl and as it becomes Europe's most populated and influential city it sprawled horizontally. The more recent cities of the nineteenth century in England like Manchester and Liverpool were described as acting in a very similar way to American cities such as Baltimore and Chicago. Friedrich Engels described the 'unbroken girdle of working-class neighbourhoods in central Manchester that extended out from the commercial district for a mile and a half in every direction and beyond as the quarters of the upper and middle bourgeoisie.''8 This statement could easily have been about any industrial city in America in the late nineteenth century. American suburbs in the twentieth century were often located far from the city centre for example Sewickley outside Pittsburgh. "In short, whether residential or commercial, year-round or seasonal, contiguous with the settled area of the city or scattered across the hinterland, suburban or exurban, decentralization and sprawl were already widespread in large cities throughout the developed world by the end of the nineteenth century." ...read more.