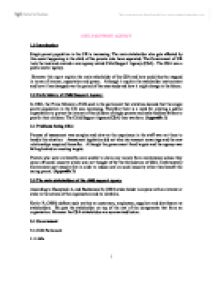 How has the stakeholder environment of the child support Agency changed over the period of the case study.

CHILD SUPPORT AGENCY 1.0 Introduction Single parent population in the UK is increasing. The main stakeholder who gets affected by this social happening is the child of the parents who have separated. The Government of UK took the lead and created a new agency called Child Support Agency (CSA). The CSA was a public sector agency. However this report explain the main stakeholder of the CSA and how could they be mapped in terms of interest, expectation and power. Although it explain the stakeholder environment and how it has changed over the period of the case study and how it might change in the future. 2.0 Early history of Child Support Agency: In 1991, the Prime Minister of UK said in the parliament that statistics showed that the single parent population in the UK was increasing. Therefore there is a need for creating a public organisation to protect the interest of the children of single parents and make feckless fathers to pay for their children. The Child Support Agency (CSA) then was born. (Appendix 1) 2.1 Problems facing CSA: Process of assessment was complex and slow as the experience in the staff was not there to handle this situation. Assessment legislation did not take into account remarriage and the new relationships acquired thereafter. ...read more.

Social security must expect less from the new environment as burden on this should reduce. More paying fathers are expected have more active role. These are depicted in Fig.5 EXPECTATION NEGATIVE POSITIVE A LOW POWER C C HIGH 5.3 Power The Power versus power depiction in Fig.6 shows that honest and co-operative to have better treatment and more power. This is certainly expected to make the lives of the children better as single parents also are supposed to get better attention from the CSA. The employees are expected to play a more constructive role though with less power which should be a good news for everyone. POWER INDIRECT DIRECT A LOW POWER C C HIGH 6.0 How has the stakeholder environment of the child support Agency changed over the period of the case study? How might it change further in the future? In the beginning the inception of CSA was welcomed. However over a period of time CSA ran into trouble due to conflict in the stated goals and the social requirements (Appendix 2 ). 6.1 Organisational behaviour: Huczynski A, and Buchannan D, (2001) give a model on how the environment of an organisation could be defined. It is applied to CSA. ...read more.

Initially the atmosphere was one of great expectation. The SWOT analysis showed that CSA could be a viable organisation. However the PESTEL analysis shows both favourable and unfavourable environment. The analysis on the past and present environments shows that CSA has been in turmoil. With the result many of the stakeholders has lost faith in the CSA. The situation showed improvement when changes where initiated in CSA with the main stakeholder the child was brought in as the main focus of the CSA. With more support from the Government the CSA is expected to provide a better environment to the many stakeholders. 8.0 Recommendation . 8.1 Improve on the assessment procedure to make them customer friendly. 8.2 Make the assessments through computerisation and office automation. 8.3 Draft in more interest groups in the management so that more meaningful results are achieved. 8.4 Interact with the Government to make flexible rules so that most stakeholders who are affected by conflict of rules are taken care of without creating any problems. 8.9 Have more satisfied parents by a strategy of eliminating harassment to the co-operating parents, providing relief to single parents covered by CSA and social security, making policies that strengthen support to the affected children, make greater effort in tracing the absent parent and better publicity. This is expected to make the media friendly, the interest groups to support CSA better and the Government to respond better. ...read more.