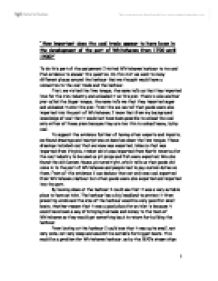 `How important does the coal trade appear to have been in the development of the port of Whitehaven from 1700 until 1900?'

`How important does the coal trade appear to have been in the development of the port of Whitehaven from 1700 until 1900?' To do this part of the assignment I visited Whitehaven harbour to try and find evidence to answer this question. On this visit we went to many different places around the harbour that we thought would have a connection to the coal trade and the harbour. First, we visited the lime tongue, the name tells us that they imported lime for the iron industry and unloaded it on this pier. There is also another pier called the Sugar tongue, the name tells me that they imported sugar and unloaded it onto this pier. From this we can tell that goods were also imported into the port of Whitehaven. I know that from my background knowledge of coal that it would not have been possible to unload the coal onto either of these piers because they are too thin to unload heavy, bulky coal. To support the evidence further of having other exports and imports, we found drawings and inscriptions on benches down the lime tongue. These drawings included coal that we know was exported, tobacco that was imported from Virginia, timber which was imported from North America for the coal industry to be used as pit props and fish were exported. We also found the old Custom House, pictured right, which tells us that goods did come in to the port of Whitehaven and people had to pay custom duties on them. From all this evidence I can deduce that not only was coal exported from Whitehaven Harbour but other goods were also exported and imported into the port. By looking down at the harbour I could see that it was a very suitable place to have an inlet. The harbour has a big headland to protect it from prevailing winds and the size of the harbour would be very good for small boats. ...read more.

The Saltom pit would have been interesting because it was the first mine to mine coal under the sea. From all of this evidence I have come to a number of conclusions. I have concluded that coal was the main export and was exported in large quantities. There were also different imports at different times between 1700 and 1900. The evidence that proves this is the old customhouse where the imports had to pay custom duties on the goods imported also the lime and sugar tongues, tell us that sugar and lime, were imported. The graph on the rise and fall of Whitehaven shows that a lot of coal was exported. I have come to the conclusion that Whitehaven was perfect for the transportation of coal up until the late 1800's.The size and shape of the harbour and headland was just right for the small sailing boats, the headland protected these boats from prevailing winds. In the 1870's steam ships became popular, this would cause problems for Whitehaven as the harbour would have been too small for these big steam ships. The harbour was also perfect for transporting coal because it was close to all the mines in Whitehaven so this would mean that the coal would not have to travel far to be loaded onto the ships. I have also come to the conclusion that Whitehaven harbour was more important in 1700 and 1800 than it was in 1900. To support this is the graph the rise and fall of Whitehaven that shows us that the amount of coal that was exported. The amount of coal exported began to decline about the time of the railways and steam ships becoming popular, which could mean that the harbour wasn't being used as much for the export of coal and also because of the railways and steam ships Whitehaven's hinterland began to decrease. My final conclusion is that coal helped the harbour grow. ...read more.

Also Whitehaven didn't have lock gates so this put it at a disadvantage because it meant the boats had to wait until high tide to come in and out of the harbour. This meant that Whitehaven harbour was more important in 1700 and 1800 than in 1900. I have concluded for this part of the assignment that the beacon centre is only there to attract tourists and to make money. I have also concluded that the John Paul Jones video is also just a way of making money and not about informing historians about the raid on Whitehaven harbour. My conclusion of John Paul Jones diary extract is that although it was useful in telling me about a typical night in the harbour it does not contain enough information about the harbour or about the coal trade. I have also concluded that the sail to steam video was useful in telling me about the development from sail boats to steam ships but it did not contain any information about Whitehaven. I have come to the conclusion that although the census results tell us a lot of information about the amount of people living on Mount Pleasant and the amount of people working down the mine it doesn't give us sufficient evidence to answer the question that is part 1. My conclusion that the visit to Whitehaven harbour was much more useful to me in answering the question that is part 1 than any of the other sources. Whitehaven harbour contained lots of unwitting evidence about the harbour and how it developed between 1700 and 1900. It also gave me a lot of information about the coal trade and how it relied on the harbour to be exported. This source contained information about both the harbour and the coal trade so this makes it very useful and also reliable because we can see the evidence. This source is also typical because it contains the remains of things (like the mines) that were actually there between 1700 and 1900 1 1 ...read more.