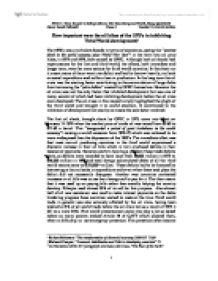 How important were the oil hikes of the 1970's in inhibiting Third Worlddevelopment?

How important were the oil hikes of the 1970's in inhibiting Third World development? The 1970's was a turbulent decade in terms of economics, seeing the "severest shock to the world economy since World War Two"1 in the form two oil price hikes, in 1973 and 1979, both caused by OPEC. Although both oil shocks had repercussions for the first and third world, the effects, both immediate and longer term, were far more serious for third world countries. In the short run it meant many of them went into deficit and had to borrow heavily, cut back on social expenditure and suffer a loss in production. In the long term the oil crisis was the starting factor contributing to the accumulation of large debts from borrowing the "petro dollars" created by OPEC themselves. However the oil crisis was not the only factor that inhibited development but was one of many, several of which had been inhibiting development before the oil crisis even developed. The oil crises in this respect simply highlighted the plight of the third world and brought it to world attention. It contributed to the inhibition of development but was by no means the sole factor involved. The first oil shock, brought about by OPEC in 1973, came into effect on January 1st 1974 when the market price of crude oil was raised from $3.60 to $11.65 a barrel. ...read more.

After OPEC had increased the price of oil its current account surplus increased from $64 bn in 1974 to $114 bn in 1979-806. The OPEC countries in turn put the money into western banks for stability purposes. Upon receiving this large amount of money, named "petro dollars" the banks decided to lend it out, particularly to third world countries on the basis that as countries they couldn't become bankrupt in the same way a firm could. They lent it out with a variable rate of interest and the third world was only too happy to borrow the money. However they often borrowed more than they could afford to pay back. The debt problem was aggravated in the 80's when Ronald Reagan came to power in the US. He believed that his country could go into debt with large borrowing as long as they were in a position to repay it. However in borrowing he had to make sure there was no inflation accompanying it. So this meant keeping the interest rates high. This in turn doubled the third world's debts making them impossible sums to pay back. Therefore after this the third world often spent much of its income on interest payments to the West to the serious neglect of its own infrastructure, economy, and physical capital. Thereby development was hindered indirectly by the oil crisis. ...read more.

So in some places there would be underemployment where many would be educated but would be jobless and have no capital to work with. This was the case in Sri Lanka. MNC's that came in were often criticised for their exploitation of labour, paying the locals low wages but demanding long hours in return. The use of child labour was also a controversial issue at the time. The countries that brought in MNC's also suffered because profits were sent back to the country of origin. So this hindered development. The underdevelopment of the third world can be put down to a "viscous circle of factors"9 many of which do not seem to have simply solutions. There have been many approaches to try to encourage third world development from a move towards free trade to structural adjustment programs pushing nations to take a more outward looking approach. The oil crisis was the catalyst in the third world's history that revealed the problems that had been building up pre 1973. It did cause a variety of difficulties for the third world but was by no means the single factor inhibiting development. Third world development is still hindered today and will continue to be an issue for debate as the obstacles in its way have not yet been dealt with. In hindsight therefore the oil crisis no longer seems to be such an important factor in the inhibition of Third World development. ...read more.