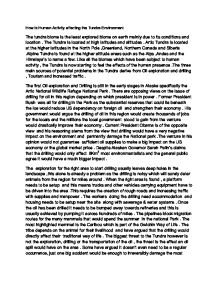 How is Human Activity affecting the Tundra Environment ?

How is Human Activity affecting the Tundra Environment

The tundra biome is the least explored biome on earth mainly due to its conditions and location . The Tundra is located at high latitudes and altitudes . Artic Tundra is located at the higher latitudes in the North Pole ,Greenland, Northern Canada and Siberia .Alpine Tundra is found at the higher altitude areas such as the Alps ,Andes and the Himalaya’s to name a few. Like all the biomes which have been subject to human activity , the Tundra is now starting to feel the effects of the human presence .The three main sources of potential problems in the Tundra derive from Oil exploration and drilling , Tourism and increased traffic .

The first Oil exploration and Drilling is still in the early stages in Alaska specifically the Artic National Wildlife Refuge National Park . There are opposing views on the issue of drilling for oil in this region depending on which president is in power . Former President Bush  was all for drilling in the Park as the substantial reserves that could lie beneath the ice would reduce US dependency on foreign oil  and strengthen their economy . His government would argue the drilling of oil in this region would create thousands of jobs for the locals and the millions the local government  stood to gain from the venture would drastically improve their economy . Current President Obama is of the opposite view  and his reasoning stems from the view that drilling would have a very negative impact on the environment and  permantly damage the National park .The venture in his opinion would not guarantee  sufficient oil supplies to make a big impact on the US economy or the global market price . Despite Alaskan Governor Sarah Palin’s claims that the drilling would only affect  8Km2  most environmentalists and the general public agree it would have a much bigger impact .

The  exploration for the right area to start drilling usually leaves deep holes in the landscape ,this alone is already a problem as the drilling is noisy which will surely deter animals from the region for miles around . When the right area is found , a platform needs to be setup  and this means trucks and other vehicles carrying equipment have to be driven into the area .This requires the creation of rough roads and increasing traffic with supplies and manpower . The workers  doing the drilling need accommodation  and housing needs to be setup near the site  along with sewerage & water systems . Once the oil has been drilled it needs to be bumped away towards refineries and this is usually achieved by pumping it across hundreds of miles . The pipelines block migration routes for the many mammals that would spend the summer  in the national Park . The most highlighted mammal is the Caribou which is part of the Gwichin Way of Life . The tribe depends on the animal for their livelihood  and have argued that the drilling would directly affect their  traditional way of life . The biggest threat to the Tundra however is not the exploration, drilling or the transportation of the oil , the threat is the effect an oil spill would have on the area . Some have argued it doesn’t even need to be a regular occurrence, just one big accident would be enough to irreversibly damage the most unique biome in the world .The effects of a big spill would be further magnified by the remote location of the Tundra making recovery efforts that much harder . Enviromentalists would point to the Exxon Oil Spill in 1989 is a good example of what could happen .This particular spill was not the biggest in history but the location of the spill made its effects the worst . This could be the same for any spill in the Tundra and the effects would be felt for decades much like the Exxon spill . The Oil threat  affects the Artic Tundra mostly , in the Alpine  ,Tourism and Transport are the two biggest problems.

Starting with Tourism ,  the human need to visit new and exotic places has lead to the Alps becoming a huge skiing attraction over the last 20 years . The Tourism industry has created a lot of jobs in a small amount of usable space. Everything ranging from factories ,houses, resorts ,farms, churches can be found in this biome despite the limited space available in the valleys .There are 600 ski resorts across 650 miles which amounts to a resort a mile ,this shows just how popular skiing is in this region and the numbers of tourists it brings in . Some towns in this area have a small local population of just 10 000 but they are never less than 100 000 people living there at one time . The other 90% being tourists ! . Clearly business in this region is very profitable but it comes at a cost .

Global warming affects the industry which in turn affects the environment . Warmer temperatures lead to quicker snow melt and for  an area entirely dependent on tourists who come there for snow sports  this is bad for business. An over reliance on tourism could leave the entire area in a massive depression if the climate continues warming . A depression in the Alps would mean mass unemployment and depopulation without tourists to rely on for jobs and  a steady income  much like the disappearance of coal in South Wales which led to a depression there .

Before that happens however, tourism will continue to affect the Alpine Tundra . Snowmobiles which are a big attraction are a hazard on the plants that grow in the area .Lichens and Shrubs are very easily destroyed and in the Tundra  chances of recovery range from little to non – existent .Grasses are much tougher and eventually cover the entire area severely reducing the biodiversity .  Walkers also affect the vegetation in theTundra  as paths are soon formed by the repetitive footprints  and while this would not be a big problem in a different climate such as the Uk . In the tundra the effect is increased as the plants don’t spring back up after a 100 people  whereas it could take a 1000 to permanently make paths on a grassy area in the Uk.The authorities have tried to counter this by creating sand and gravel roads for walkers . While these take the pressure away from the plant species ,the sand has been found to contaminate the thin peaty soil located in the Alpine region .This contamination  in turn affects what plants can and can’t grow in the area.  The walkers normally campers going to different sites in the area and this again has a negative effect on the Alpine Tundra if not policed properly .Just like walking on the plants can damage them , mass camping in one spot in this fragile region can ruin it permanently . This however can be countered by simply allowing visitors to camp anywhere rather than restricting them to one area or campsite .That way the pressure is spread out across the area allowing the plants to sufficiently recover from minor use .

The final problem facing the Tundra is the increased traffic  which is mainly due to increased tourism and the need to go through the mountain rather than around it  . As more and more people yearn to visit the Alps the traffic load has increased and the authorities in the region have had to respond to prevent long traffic jams . Their response has been to build 10 tunnels under the Alps at a massive cost both financially and environmentally .  The fumes from the ever increasing traffic have been getting trapped  inside the valleys  and they cannot be blown away by the anti-cyclonic stable air .This pollution spoils the scenery and beauty of the Alps as the growing layer of fog will soon turn into a permanent haze that is common in busy Chinese cities . Indigenous species of both fauna and flora are also victims of the bad air in the Alps as numbers of both have been steadily lowering over the years . The air quality in the Alps is now so bad the entire region has been added to the list of ecologically endangered areas .

The increased traffic has inevitably led to increased noise levels and in an area surrounded by mountains the noise is magnified  and travels a longer distance . On flat land the noise from the thousands of cars and trucks rumbling through the tunnels would dissipate after 400m but with the mountainous region it travels for up to 2000m . For local residents this is an increasingly worrisome issue as they are now being forced to deal with bad air,noise and higher tourist numbers which is steadily decreasing their quality of life .