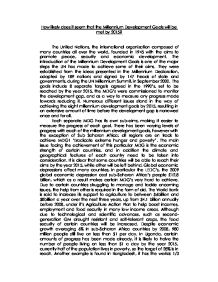 How likely does it seem that the Millennium Development Goals will be met by 2015?

How likely does it seem that the Millennium Development Goals will be met by 2015? The United Nations, the international organization composed of many countries all over the world, founded in 1945 with the aims to promote peace, security and economic development. The introduction of the Millennium Development Goals is one of the major steps the UN has made to achieve some of their aims. They were established from the ideas presented in the Millennium Declaration, adopted by 189 nations and signed by 147 heads of state and governments, during the UN Millennium Summit, in September 2000. The goals include 8 separate targets agreed in the 1990's, set to be reached by the year 2015, the MDG's were commissioned to monitor the development gap, and as a way to measure any progress made towards reducing it. Numerous different issues stand in the way of achieving the eight millennium development goals by 2015, resulting in an extensive amount of time before the development gap is narrowed once and for all. Each separate MDG has its own sub-aims, making it easier to measure the progress of each goal. There has been varying levels of progress with each of the millennium development goals, however with the exception of Sub Saharan Africa; all regions are on track to achieve MDG1 'Eradicate extreme hunger and poverty'. ...read more.

Millennium Development Goals 4, 5 and 6 all focus on global health issues, child mortality, maternal health, HIV/Aids, malaria and other diseases. These three MDG's have already been achieved by Thailand; however other countries appear to be struggling. Numerous efforts have been made to help encourage the achievements of the MDG's, such as TNC's beginning to invest more ethically, more environmentally responsible and with better working, health and safety conditions in developing countries, TNC's are located worldwide so the changes they make in their work effort will affect many people. The 'Call to Action' led by the UN Secretary-General Ban Ki-Moon, and UK Prime Minister Gordon Brown, introduced professionals in medicine, to find cures for diseases that most afflict developing countries, and in education. As a result of this and aid from abroad, several killer diseases have been eradicated and major progress is being made towards fighting TB, HIV/AIDS and Malaria, as a global result, there has been improvements in containing the spread and fatality of malaria and TB, and the spread of HIV/AIDS remains low. In Uganda, 50% of the reported illnesses in 2006 were Malaria, down from 56% in 1999, but still way of target set in MDG6. ...read more.

When or if, the 8 Millennium Development Goals are reached by all countries, by the time this is done so, there will be more and even new problems the world has to face. However, viewing the MDG's in a more positive light, the world needs to see them as more of a reward instead of simply a to-do list. If the countries of the world really worked together and strived to tackle the oncoming issues and the obstacles standing in their way, being the MDG, then it could be said that the MDG could be achieved by 2015. It requires the involvement and motivation of all countries, which may be seen as unlikely, this is one of the main issues, holding back the success of the eight Millennium Development Goals. A dramatic change of anything requires a lot of time, there should not be a set date in which to achieve these MDG's, but instead they should be made a global ongoing process, perhaps giving smaller goals each year, providing more motivation for countries to achieve them, instead of feeling lost and confused working towards a deadline years ahead. Sources: UNESCO, http://www.un.org/millenniumgoals/poverty.shtml, Topic Eye Magazine -'Run, don't walk', A2 Geography for Edexcel Textbook, Edexcel A2 Geography Textbook, class notes. ...read more.