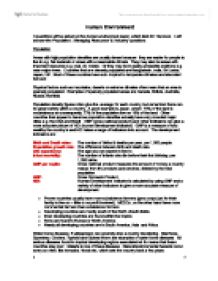 Human Environment 3 questions will be asked on the human environment paper, which lasts for 11/2 hours. I will answer the 'Population', 'Managing Resources' & 'Industry' questions. Population Areas with high population densities are usually dense because they are easier for people to live in e.g. flat lowlands or areas with a reasonable climate. They may also be areas with important resources e.g. coal, oil, metals. Or they may be in easily accessible positions e.g. near major rivers. Countries that are densely populated are Bangladesh, India, Sri Lanka, Japan, UK. Most of these countries have sub-tropical to temperate climates and abundant flat land. Physical factors such as mountains, deserts or extreme climates often mean that an area is sparsely populated. Examples of sparsely populated areas are Canada, Bolivia, Australia, Russia, Namibia. Population density figures often give the average for each country, but remember there can be great variety within a country. A good example is Japan, where 75% of the land is mountainous so consequently, 77% of the population live on 16% of the land. Other countries that appear to have low population densities actually have very crowded major cities e.g. ...read more.

Open cast mining causes visual and noise pollution, e.g. Daisy Hill, but quarries can be filled in again with the excess waste when all the coal has been extracted. Oil and natural gas are easy to transport and are also less harmful to the environment than coal. However, the burning of these substances release harmful chemicals that contributes to acid rain. The acid can be carried by rain across country borders and also from one continent to another e.g. the U.K. to Scandinavia. Countries that have lots of impermeable rock cannot absorb the acid rain and it is often carried as surface water to rivers and lakes that are then automatically contaminated, often along with the fish stocks and other animals. Nuclear energy contributes to global warming less than coal, oil and gas. Global warming is caused by the greenhouse effect, which in turn is caused by gases being unable to leave the atmosphere once they have entered it, trapping heat radiation. The waste from nuclear energy is very radioactive and has to be kept safe for a very long time before it is safe to unload. ...read more.

* To get within 'trade barriers'. * To find cheaper workers. * To be more visible to the target area's consumers. When locating abroad a company might consider the following points: 1. Good road access for workers and components? 2. Airport nearby for business trips? 3. Plenty of workers nearby? 4. Relatively cheap workforce due to unemployment in the area? 5. Financial incentives available? 6. Flat site with room for expansion? 7. Natural disasters possible? The Nissan factory was built in 1984 on a greenfield site outside Sunderland. Now the factory produces over 200,000 cars each year. This results in an increase in employment opportunities with 3000+ jobs available. Although unemployment in the North East is still relatively high due to the decline of heavy industry, these jobs increase wealth and quality of life directly for all families involved. Local shops and businesses are helped by Nissan's employees (or Nissan itself) spending money in their establishments. Nissan has invested around �1.5 billion in the company since 1984, so the jobs should be fairly stable for the future, providing security for the families. In the long term, the local government in the area will benefit through taxes from Nissan, which means that money can be put into local services. 1 7 ...read more.