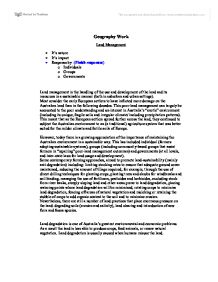 Geography Work Land Management * It's nature * It's impact * Response by (Finish responses) o Individuals o Groups o Governments Land management is the handling of the use and development of the land and its resources in a sustainable manner (both in suburban and urban settings). Most consider the early European settlers to have inflicted more damage on the Australian land than in the following decades. This poor-land management can largely be accounted to the poor understanding and un-interest in Australia's "exotic" environment (including its unique, fragile soils and irregular climate/ including precipitation patterns). This meant that as the European settlers spread further across the land, they continued to subject the Australian environment to an (a traditional) agriculture system that was better suited for the milder climate and fertile soils of Europe. However, today there is a growing appreciation of the importance of maintaining the Australian environment in a sustainable way. This has included individual (farmers adopting sustainable-systems), groups (including community-based groups that assist farmers in "repairing" poor-land management outcomes) and governments (at all levels, and inter-state laws for land usage and development). Some contemporary farming approaches, aimed to promote land-sustainability (mainly anti-degradation) including: limiting stocking rates to ensure that adequate ground cover maintained, reducing the amount of tillage required; for example, through the use of direct drilling techniques for planting crops, planting trees and shrubs for windbreaks and soil ...read more.

Along with the issue of land management, introduced species have become a problem having disrupted Australian ecosystems greatly. These introduced species compete with animals and plants for food and space for their habitat, and are a major cause of land degradation. Recent studies show that at least 20 species of mammals, 30 species of birds, 21 species of fish, 5 species of amphibians, 500 invertebrates and 1500 plants have been introduced to Australia and now reproduce in the wild. Another process that leads to land degradation is erosion, which is the loss of soil due to the actions of water and wind. Even though erosion is a natural process, it removes new soil from the surface and prevents the planting of new seeds. Human activities have accelerated this process by removing the vegetation and uncovering the soils, impacting Australia's environment severely. Land clearing has had a significant impact to the Australian environment. More than 35% of woodlands have been cleared or severely altered. The forests that have remained are gradually disappearing at the rate of 1% each year. Land clearing has taken place for agriculture, but now is being used to produce paper, timber and building materials. In 2005, approximately 74000 hectares of land was cleared. Farmers make the vast majority of "open-views" by individuals. ...read more.

The Department of the Environment and Heritage's Land Management is responsible for the Australian Government's activities to maintain landscapes, biodiversity and ecosystems while ensuring sustainable production systems and providing for other human needs. A set of guidelines have also been introduced that outline the responsibilities of various levels of government and individual landholders under the federal government's Native Vegetation Framework. The response to land management in Australia is mostly controlled by the federal and state governments. The federal government puts forward policies which keep a balanced environment, between development and conservation of natural resources and the landscapes. For example, the state government has allocated forests for timber, all owned by the state, which therefore protects the native forests. Many national parks are also in place to protect Australia's bushland. Many steps are taken to preserve the land. One is to set aside areas for long-term conservation, which requires scientific investigations to be carried out to determine the best areas to reserve, and to conserve a full range of biodiversity. Also the federal government has put in place policies to manage the problem of Salinity, which is one of the most significant environmental problems facing Australia, caused by European farming practises., the federal government has provided the National Action Plan for Salinity and Water Quality to avert and stabilise trends in dry land salinity, and of course to improve the water quality. The federal government also controls the amount of mining excavation that occurs to sustain our natural environment. ...read more.