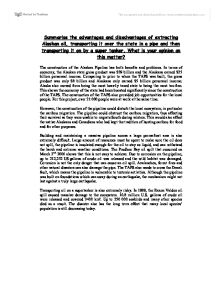 The construction of the Alaskan Pipeline has both benefits and problems. In terms of economy, the Alaskan state gross product was $39 billion and the Alaskans earned $25 billion personnel income. Comparing to prior to when the TAPS was built, the gross product was only $8 billion and Alaskans only earned $5 billion personnel income. Alaska also moved from being the most heavily taxed state to being the most tax-free. This shows the economy of the state had been boosted significantly since the construction of the TAPS. The construction of the TAPS also provided job opportunities for the local people. For this project, over 21 000 people were at work at the same time.

However, the construction of the pipeline could disturb the local ecosystem; in particular the caribou migration. The pipeline could obstruct the caribou migration, thus affecting their survival as they were unable to migrate South during winters. This would also affect the native Alaskans and Canadians who had kept the tradition of hunting caribou for food and for other purposes.

Building and maintaining a massive pipeline across a large permafrost area is also extremely difficult. Large amount of resources must be spent to make sure the oil does not spill, the pipeline is insulated enough for the oil to stay as liquid, and can withstand the harsh and extreme weather conditions. The Prudhoe Bay oil spilt that occurred on March 2nd 2006 shows that this is not easy to achieve. Due to corrosion on the pipeline, up to 212,252 US gallons of crude oil was released and the wild habitat was damaged. Corrosion is not the only danger that can cause an oil spill. Avalanches, forest fires and other natural disasters can also damage the pipe. The TAPS also needs to cross the Denali fault, which means the pipeline is vulnerable to tectonic activities. Although the pipeline was built on foundations which can sway during an earthquake, the mechanism might not last against a truly large earthquake.

Transporting oil on a supertanker is also extremely risky. In 1989, the Exxon Valdez oil spill caused massive damage to the ecosystem. 10.8 million U.S. gallons of crude oil were released and covered 3400 km². Up to 250 000 seabirds and many other species died as a result. The disaster also has the long term effect that many local species’ population is still decreasing today.