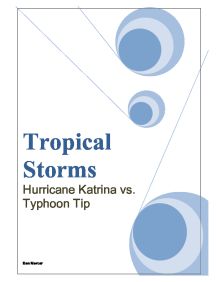 Tropical Storms Hurricane Katrina vs. Typhoon Tip Ben Mercer Introduction * Tropical storms are formed through a process called Tropical Storm Genesis * For TSG to occur certain factors need to be met * The ocean must be at the temperature of 26o or above for 50m depth from the surface this means areas within the trade wind belt, where warm winds heat up the surface, are more likely to experience the formation of tropical storms. Also the ocean temperatures are the highest at the start of autumn as they've been heated up for the duration of the summer meaning tropical storms are likely to occur around this time. * They usually start between 5-20o north or south of the equator and travel in a westerly direction. * After the pass onto land from the sea (landfall) they more towards the nearest poles, however away from the oceans they lose power due to the lack of a heat source and eventually become storms before being classified as depressions. * Atlantic Hurricanes are generally formed in the gulf of Mexico as the enclosed area means it can be heated up quicker and looses less heat * Tropical storms are first seen as Tropical Depression and then once they become stronger they become Tropical Storms they then go up the categories from 1 to 5. ...read more.

* The Superdome was used to shelter people from the storm however the roof was broken and there was no order to the inside and high tension caused violence. 6 deaths were reported here 2 from possible suicide. * 700 people were found dead most of which were found floating in the flood water. Canada * As Hurricane Katrina subsided it caused 62 tornadoes to form * There was little damage here and it was caused mostly by falling trees Typhoon Tip Date Formed October 4th 1979 Date Dispersed October 19th 1979 Maximum Wind Speed 190 mph Deaths 86 Landfall region Japan Lowest Sea-Level Pressure 870mbar world record Maximum Size Reached 2,220km world record Area Details The main area affected was Japan which relied mainly on fishing and agriculture for its economy. At the time the country was relatively wealthy. However other areas affected were small islands to the south of Japan including, Guam and Chuuk. Storm Events The origin of Typhoon Tip was when three circulations formed in the monsoon trough between the Philippines and the Marshall islands. To the southwest of Guam, an island in the southwest of the Pacific, on October 3rd one of these circulations formed into Typhoon Roger. On the same day, south on Pohnpei, another circulation formed into a depression. ...read more.

This would suggest that Japan was a lot better coped for the storms or that they have better placed cities, which aren't in giant craters. One aspect which may of lead to the problems in America was the large amount of flooding; Japan had much less problems with flooding which may be because of the mountainous areas. Japan had also had a very dry season before so a lot of the water would just move straight into ground storage. The flooding spread much quicker in America due to areas being below sea level meaning they would fill much more naturally and not just experience water flowing through the area. The mountains in Japan also meant mud slides were a much larger problem. The strength of Tip when it reached Japan was much weaker than Katrina. Wind speeds were only at 80mph at landfall compared to Katrina at 125mph. This meant the storm was much weaker. Japan was also exposed to the storm for a much shorter time with the storm passing over Japan within a day and out to sea meaning the tropical depression would have no more affect on the country. Hurricane Katrina was at hurricane status for almost 2 days after landfall and it also weakened on land causing ore problems as it headed north. ?? ?? ?? ?? Ben Mercer Tropical Storms ...read more.