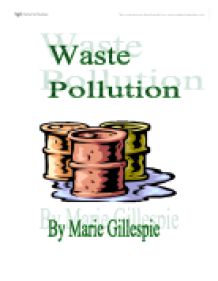 Task 1: Introduction I am going to research waste pollution. I have chosen to research waste pollution because it is a topic of general interest which is effecting the environment and health of many people. I am going to research this topic area by first using primary sources, writing letters and trying to interview waste disposal, incineration and landfill companies and also local governments and councils to get their views and what they are doing to stop waste pollution. I will also be interviewing and giving questionnaires to the local public. I am also going to use secondary sources such as the internet, news papers reports, books and leaflets to find out if there has been any previous research on waste, and also to get information to back my research. The different types of waste pollution in the UK are: * Radioactive waste * Household waste The waste is either taken to landfills or incinerators where they are disposed. Incineration with energy recovery makes use of waste as a resource. Incineration disposes of waste by combustion with or without energy recovery. 'co-incineration' takes place in some industrial processes that produce energy or materials. Of the 7,000 incinerators in England and Wales: * 11 burn municipal waste * Some 60 burn waste including chemicals, clinical waste and savage sludge * Over 10 are cement kilns or power stations co-incinerating waste * Over 3,000 burn wood * About 1,700 burn oil * Some 3,000 are small farm incinerators. Municipal waste incineration is increasing and the EU landfill directive requires much more to be diverted from landfill over the next 20 years. Even if the governments waste targets are met outlets such as incineration will increase. The amount of waste incinerated or recovered by other means may need to double by 2003 and to reach 10 million tonnes by 2010. Landfill has been a favoured option for waste disposal in the past, but it is a waste of resources. ...read more.

They identify relevant symptoms by the person having irritated skin, breathing problems, having found these illnesses they can identify that the illness is caused by the environmental factor by asking if they live near a landfill or incinerator and knowing if any other patients have been diagnosed with the same illness and live near an incinerator or landfill. Task E4: Government The government in Britain is tackling waste pollution by setting up the greater London authority act 1999 and the draft municipal waste management strategy. The greater London authority act 1999 requires the mayor to prepare a municipal waste management strategy. It must contain the mayor's proposals and policies for the recovery treatment and disposal of municipal waste, and contain other proposals and policies relating to municipal waste as he considers appropriate. The Mayor must have regard to the principal purposes of the greater London authority, the effect the proposed strategy will have on the health of people of London, and the achievement of sustainable development in the United Kingdom. The mayor has certain powers of direction when waste authorities in London tender waste contracts. These powers are to enable the waste strategy. The draft municipal waste management strategy was presented by the mayor (Ken Livingstone). The main aim of the draft waste strategy is that London's municipal waste no longer compromises a wider vision for London as a sustainable city. To achieve this wasteful lifestyle habits must change so that only the absolute minimum amounts of waste are produced by us all, and the environment is no longer under pressure from waste. Also to ensure that municipal waste is managed in a way that minimises the advertise impact on the local and global environment, and on Londoner's communities, economy and health. Although the greater London authority act 1999 requites the mayor to prepare a municipal waste management strategy, covering waste collected by local authorities, municipal waste only accounts for around a quarter of London's total waste. ...read more.

To make the research more accurate I could have got more participants to take part in the research so I could have had more accurate results, the results could have also been improved by making the questionnaire more accurate by adding more questions on the health risks that be caused by incineration and going into more detail with some of the questions to justify the results. Also having more time to spend with the participants when filling in the questionnaires, as I was limited to a certain amount of time with each participants, which could have made them rushed and therefore less reliable. When carrying out the research the difficulties I came across were finding participants to take part in the research and to answer all questions fully and honestly. Task 10: Government & Councils The councils activities do not really seem to be working, they are not really doing any thing to stop using landfill and incinerators except offering more recycling schemes but they have made no plans to cut down on using incineration and from looking at waste statistics you can seen that the same amount of waste is still being incinerated as before the doorstep recycling started so this has made no affect on cutting down on the was problem. The council could do more by setting up more recycling centres and by making it easier to recycle they could then cut down on the amount of waste incinerated. Government statistics show that legislations are working but these legislations do not go far enough as new incinerators and landfills are still being built, and current legislations do not stop incineration in anyway. The government could cut down on how much waste is incinerated by setting targets to do this. Also by doing more this like the greater London authority cat could also stop waste pollution. The government set waste targets but often these are not met, so it is hard to trusting the government on issues such as reducing incineration, when targets are not met and more incinerators being built. ...read more.