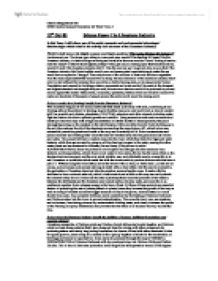 In this Essay I will inform you of the social, economic and environmental advantages/ disadvantages which relate to the activity and outcomes of the Limestone Industry.

15th Oct 03 Science Essay-The Limestone Industry In this Essay I will inform you of the social, economic and environmental advantages/ disadvantages which relate to the activity and outcomes of the Limestone Industry. Firstly is shall answer the highly common and simple question; 'Why bother Having this industry?' Look around you. The house your siting in, warm and cosy wouldn't be standing if it wasn't for the limestone industry, in fact buildings as strong and durable as these are wouldn't exist. Finding it hard to read this essay? A little bit short sighted perhaps? Then get out you reading specs that they themselves, wouldn't exist if the limestone industry didn't. I like the new car you've got out side, im sure that if the limestone industry didn't exist neither would your car because steel manufacturing to make the car would be too expensive. Hungry? Then swipe some of the millions of fresh and delicious vegetables from the local supermarket that wouldn't be so cheap let alone delicious if the limestone industry didn't exist. In fact without this industry there would be no fertile farming land, so farming wouldn't exist. Foundations and cement for buildings, statues, pavements and roads couldn't be made to the cheapest and highest standard and strengths they are now, the sea wave barriers couldn't be produced to prevent erosion against the coasts. Glass jewels, ornaments, spectacles, kitchen-ware and windows couldn't be made and hundreds of thousands of people around the entire world would be missing a job. So how exactly does farming benefit from the Limestone Industry? Well limestone happens to be calcium carbonate that reacts quite easily with acid, neutralising it and forming salts as the product. In farming, to grow healthy crops you need a pH level as close to neutral (pH7) as possible and nitrates, phosphates, CALCIUM, potassium and other minerals including water, light and carbon dioxide to optimise growth and nutrition. ...read more.

cannot react with the CO released because it is in Liquid state compared to Gas state. Therefore it can only react with other chemicals in the furnace and will as such with the slag in the iron ore (sands, silicates, earth, etc...). It reacts with this and produces Calcium silicates (CaSiO3) which are less dense than Iron, hence in a furnace at 2000 degrees Celsius it will float on top of the molten Iron, seperating the slag from the pure iron which is them extracted for solidifying and usage via a separate pipe in the furnace. The Calcium compounds produced themselves, are transported out the furnace via a separate pipe further up, and can then be used in building materials, cement manufacture and glass productions. Because limestone is so widely available, and also quite high in the reactivity series, the reaction to separate the slag from the Iron by using this chemical is fast, and cheap, so producing pure iron and steel for use in piping, transportation, shelter and other resources is very cheap, and comes easily in large quantities for huge mass production which inevitably aids the employment of the population, since the more steel produced the bigger the factories to make use of it; and the bigger the factory the more people needed to work in it and allow it to succeed. This obviously leads me into the next section about limestone-How it benefits employment in our society. So how does the Limestone Industry Benefit Employment to our society? The activity of the limestone industry involves building Machinery to quarry the stone, lorries and other vehicles to transport the stone, people to develop, expand and work for the business(Mainly those who use the machinery to extract the stone and drive its transportation units.) and people to work for the companies that use the limestone to mass produce their specialised or anonymous goods, and aid the purpose of their business by significant amounts. ...read more.

* As a result of the above and the fact that 9 times out of 10, quarries sacrifice beautiful countryside and destroy animals habitats to make way for the industries development, and resources, this makes whatever houses and built up areas that are local to it very undesirable and unattractive places to be. Because of this, the locations and buildings decrease in value, and become unreasonably cheap because of their lack of desirability, meaning people who in no doubt want to move away from the area as quickly as possible, will find it really hard and end up selling their house eventually at too little a price loosing loads of money in the process. Because the quarries will only grow, so does the ugliness and pollution of the location, hence the tourists that used to visit the local places don't bother to go any more. Because of the reduction of the number of tourists, shop keepers, pubs, restaurants, tourists attractions and businesses that depend on tourists to make a profit, loose money and end up closing down. This inevitably affects the economy and wealth creating opportunities in the area and turn it into a run down immigrant and ethnic inhabited 'ghost town', instead. Concluding the advantages and disadvantages of the limestone industry; Despite it's major downfalls; which can be alarming, the limestone industry is an essential part of out well being as a whole, producing many useful outcomes from the quarried limestone which without, would make life so much more harder and expensive. There are so many things that the limestone industry has to offer and given to us in the past, that we simply take it for granted, because we haven't stopped to think and realise what real changes its made over the last few hundred years for us to see the true and good side of the limestone industry. It's so important that your life and everyone else's depends on the limestone industry- without it, probably non-of us today would exist! By Charlie Macgilchrist 10C Charlie Macgilchrist 10C GCSE Double Science/ Chemistry/ Mr Ward/ Term 1 ...read more.