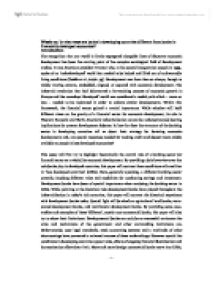 In what ways are banks in developing countries different from banks in financially developed economies?IntroductionThe recognition that our world is firmly segregated alongside lines of disparate economic development has been the starting poin

Week 10: In what ways are banks in developing countries different from banks in financially developed economies? Introduction The recognition that our world is firmly segregated alongside lines of disparate economic development has been the starting point of the complex sociological field of development studies. It was American president Truman who, in his second inauguration speech in 1949, spoke of an 'underdeveloped' world that needed to be helped and lifted out of unfavourable living conditions (Dodds et al., 2002: p3). Development was from then on always, though to widely varying extents, embedded, aligned, or equated with economic development. The industrial revolution that had kick-started a far-reaching process of economic growth in Europe and the nowadays 'developed' world was considered a model path which - more or less - needed to be replicated in order to achieve similar developments. Within this framework, the financial sector gained a crucial importance. While scholars still hold different views on the gravity of a financial sector for economic development, its role in Western Europe's and North America's industrialisation cannot be underestimated, bearing implications for present development debates. In how far does the structure of the banking sector in developing countries tell us about their strategy for fostering economic development; and, are special responses needed for making credit and deposit more widely available to people in less developed economies? This essay will first try to highlight theoretically the central role of a banking sector (or financial sector as a whole) for economic development. By providing a brief overview over the role banks play in developed countries, this paper will contrast these conditions with realities in 'less developed countries' (LDCs). ...read more.

Another common feature of banking operations in LDCs involves the nationalisation of banks, which often make them channelling their funds directly to the government, not to sectors that promise to translate loans into productive investment and hence higher economic growth. Development Banks An important feature of the banking sector in many LDCs is the existence of large development banks that put issues like economic development, poverty alleviation, adaptation of technology, etc. at the top of their agenda. One can differentiate between different types of development banks that have sprung up within LDCs or as part of international development assistance. Their economic rationale stems from historical experience, in particular the important role of development banks during the 19th century industrial revolution in Europe. Their positive effect upon development is however debatable and varies between different examples. The idea of government sponsored financial institutions accompanied Europe throughout its history; with notable revivals taking place after the two World Wars, where the massive reconstructti0n effort was facilitated by generous state loans and guarantees, channelled into the economy by partially state-owned development banks, such as the Kreditanstalt f�r Wiederaufbau (KfW) in post-War Germany. In other parts of the world, the idea of a backing state served as a model for similar institutions. The Industrial Bank of Japan, which was founded in 1900, leaned upon the Cr�dit Mobilier experience. The importance of development banks in the process of economic development can be argued about, as their quantitative contribution to net credit provided within an economy has been comparably small. ...read more.

Case studies from Argentina and Mexico (Dages, Goldberg, Kinney, 2000) also imply that diverse ownership has positive effects on the overall stability of credit in times of financial instability. Conclusion This paper has tried to show that the banking sector in LDCs is different from its counterparts in the developed world, despite the fact that a swift generalisation is of course not desirable due to the complexity of realities in different LDCs. Among the key features in LDCs are an often malfunctioning commercial bank sector and the existence of development banks. The commercial bank sector is hindered from functioning properly due to poor legal standards. Insufficient accounting standards, state-ownership and other factors contribute to problems of adverse selection and moral hazard. Among the most prominent examples of development banks are microfinance institutions like agricultural development banks. While the majority of these banks has proven to be unsustainable, some successful examples could show that - operating within a development notion - their existence is justified and also beneficial. Large multilateral banks account for a large chunk of credit provided within LDCs, but as they mostly assist governments exclusively, they are not banks in the classical sense. Banks are important driving forces behind economic growth, as the theoretical part in the beginning of this paper tried to show. Access to loans and deposits is one of the key prerequisites for sustainable economic development. Banks play the most central role in this financial intermediation. That is why the promotion of a firm legal environment for the operation of banks can always be seen as promoting development as well. The recent influx of foreign commercial banks into LDCs is an important pillar of the development of a sound financial sector in LDCs. ...read more.