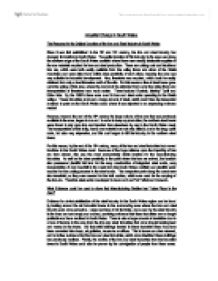 Industrial Change in South Wales The Reasons for the Original Location of the Iron and Steel Industry in South Wales Since it was first established in the 18th and 19th century, the iron and steel industry has changed its location in South Wales. The earlier location of this industry in the area was along the northern edge of the South Wales coalfield where there were readily obtainable supplies of the raw materials required for iron and steel production. These are coking coal and blackband iron ore, which were both easily available from the valley floors and sides of the Welsh mountains and were often found within close proximity of each other, meaning the area was very suitable for industrial development. Also, limestone was required, which could be easily obtained from only a few kilometres north of the site. For this reason a line of steel towns grew up in the valleys of this area, where the coal could be extracted from under the valley floors and transportation of limestone was much easier. These included Dowlais, Merthyr Tydfil and Ebbw Vale. By the 1860's there were over 35 iron and steel works operating in the Welsh valleys. ...read more.

An increase in competition has also been a major cause for the decline of these manufacturing industries in South Wales. Several countries within the EU, such as Italy and Spain receive subsidies from the European Union, which are put towards the expansion and improvement of industries such as the steel industry in these countries. This means they are more able to produce higher quality, cheaper steel than manufacturers in the UK as they are receiving extra money. For example, money from the European Investment Bank has been provided towards the building of the Taranto steel works in Southern Italy. This better quality, inexpensive steel is therefore preferable to the UK produced steel, and has aided the decline of the steel industry in South Wales. There have also been new producers, such as those in South-East Asia that are able to produce cost-effective, good quality steel because of the low labour costs available in countries such as these. The modern manufacturing plants have also helped to reduce costs, and improve quality. This has been an influence on the decline of iron and steel manufacturing in South Wales because steel consuming industries are much more likely to purchase the higher quality, cheaper steel than that produced in South Wales, causing a reduction in the production of steel in the region and therefore the decline of the industry. ...read more.

The Cardiff Bay project began in 1987 and was one of Europe's largest and most impressive urban regeneration projects, transforming over 1,000 hectares of derelict docklands and neglected industrial areas. Over �2 billion was invested in the area to regenerate it completely into a smart quayside location for modern commercial, government and leisure buildings. The project created 17,000 new jobs, reducing unemployment in the region after the de-industrialisation in the iron and steel industries, and 5,000 new buildings were produced. Money has also been spent on landscaping old industrial areas that became unsightly due to the previous manufacturing industries located there, such as lower Swansea Valley. This creates a more pleasant, and attractive area for new, modern industries. Finally, regeneration after the decline of the iron and steel industries in South Wales has been achieved by the building of new industrial estates, including those at Port Talbot and Bridgend. These estates provide new companies with brand new, ready made or custom made buildings, excellent access, and possible grants or reductions in rent for locating there, thus attracting new companies into the South Wales region and aiding its regeneration. All of the above attempts to restore the region have proved successful, and by the end of the 20th century South Wales had a much more varied and broad economic base than it had ever had before. ...read more.