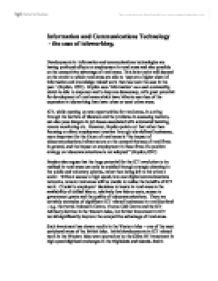 Information and Communications Technology - the case of teleworking.

Information and Communications Technology - the case of teleworking. Developments in information and communications technologies are having profound effects on employment in rural areas and also possibly on the competitive advantage of rural areas. This latter point will depend on the extent to which rural areas are able to 'capture a higher share of information and knowledge related work than has been the case in the past.' (Bryden, 1997). Bryden sees 'information' as a cash commodity, which is able to empower and to improve democracy, with great potential for development of rural areas which have hitherto seen less of the expansion in teleworking than have urban or semi urban areas. ICT, while opening up new opportunities for rural areas, in cutting through the barriers of distance and the problems in accessing markets, can also pose dangers in job losses associated with automated banking, remote monitoring etc. However, Bryden points out that rather than focusing on direct employment creation through tele-defined businesses, more important for the future of rural areas is "the impact of telecommunications infrastructure on the competitiveness of rural firms in general, and the impact on employment in these firms if a positive strategy on telecommunications is not adopted." ...read more.

This year of research resulted in the drawing up of a list of potential teleworkers in the islands - around 500 names of residents and people wanting to move back to the islands. Donnie Morrison was appointed general manager of WIICTAS which established a file of potential teleworkers - 600 people by 1998, WIICTAS created a company on Benbencula - Lasair Ltd, able to manage contracts from anywhere in the world. In 1995, Lasair was able to respond to an initial invitation to tender and landed an important contract with an American publisher specialising in indexing and abstracting business journals. The reviews (in printed form) were dispatched from California by courier and then distributed by Lasair to 35 people, 30 of whom were women, working from home, summarising the publications, indexing the various articles, adapting them to the specific characteristics of the electronic layout and putting them on the Internet. The nature of the work means that these teleworking posts constitute an activity with real added value, which goes far beyond simple data entry and involves skills in editing, re-writing, re-reading, computer graphics, etc. "An experimental contract that we tried out in 1996 with the Scottish Health Board proved to us that purely 'mechanical' data entry was non-profitable because it faced fierce competition from Third World countries", points out Donnie Morrison. ...read more.

Donnie Morrison underlines the following factors as essential to the creation of a business such as WIICTAS: * Public sector support for start up * Need for a leader with entrepreneurial spirit and commitment to the project * Customers must be found who are outsourcing work and will commit to assign it to the teleworking organisation * Preparation of procedures and specifications that meet customer requirements * Ability to locate and train a pool of potential teleworkers * Regular reviewing of the company's progress. The benefits to those employed in teleworking are clear, in that these are essentially new jobs created in the Western Isles, jobs for both men and women, both home and office based, with flexible working patterns, and opportunities for both skilled and less skilled workers. Teleworking broadens the economic base of the Western Isles and appears to integrate well into the existing social and economic structure of the communities in which it has made most impact (Smith,1998). The success of WIICTAS also illustrates the benefits to employers in outsourcing their work to teleworkers in remote locations. "The advanced digital telecoms network enables the Hebrides to provide high-level services to clients anywhere in the world...We are currently reversing a certain spatio-temporal conception of work: instead of people having to go to work, the work is coming to the people." (LEADER Local Action Group member). ...read more.