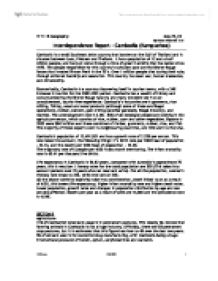 Yr 11 IB Geography: May 25, 02 By Dane Fewtrell 11.6 Interdependence Report - Cambodia (Kampuchea) Cambodia is a small Southeast Asian country that borders on the Gulf of Thailand and is situated between Laos, Vietnam and Thailand. It has a population of 12 and a half million people, and has just come through a time of great hardship that has lasted since 1975. The people responsible for this country's turbulent past are the Khmer Rouge forces that invaded Phnom Penh in the 70's. Over 1 million people died during their rule, through enforced hardship and execution. This country has seen war, human massacres, and dictatorship. Economically, Cambodia is a country discovering itself in tourism terms, with a 34% increase in tourism for the 2000-2001 period. Cambodia has a wealth of history and culture predating the Khmer Rouge tyranny and many travelers see it as an unadulterated, tourist-free experience. Cambodia's industries are in garments, rice milling, fishing, wood and wood products (although some of these are illegal operations), rubber, cement, gem mining (another generally illegal industry), and textiles. The unemployment rate is 2.8%. 80% of all employed people are working in the agriculture sector, which consists of rice, rubber, corn and other vegetables. Exports in 2000 were $942 million and these consisted of timber, garments, rubber, rice, and fish. ...read more.

Garment enterprises now employ 150,000 workers nationwide but this figure is disputed, as many factories and manufacturing plants do not officially exist for tax-evasion purposes, so the figure is in all actuality higher. Huge openings in the markets of the American, Canada and European Union have provided Cambodia with major export partners, and given them quality standards for their products to reach. Mineral and gem mining is a big business, with police and the government coming down hard on the estimated 50% of illegal operations currently operating along the border of Thailand in the North Batdambang and South Eastern Siem Reap regions. This mining is usually strip mining, which means they take the top layer of soil, trees, rocks, natural vegetation and habitats and mine for whatever particular mineral they are looking for. This is a huge disturbance (Infact it destroys it) to any environment, and in when a company does this environmental legislation states that all soil and rocks must be replaced, and trees replanted, so that some the environment and can regrow and resemble something of it's previous appearance and function. Illegal companies do not do this reparation work and turn unique and biologically diverse area into a desolate crater, full of mining pollution and waste. The minerals being mined for are gemstones, iron ore, manganese, and phosphates. ...read more.

logging that carries the title for most urgent industry to fix, as it is destroying the forests and killing animals. This is saying the least about what the implications of this destruction may be. Slowly the government is naming national parks and declaring them forbidden to forestry companies. What is happening when companies chop trees down is that they are destroying habitats of wildlife, preventing things from ever growing again because of their wastes, and as a result reducing the total bio-diversity of the country. In these rain forests and woodlands, many endangered animals that are extinct in Thailand, Vietnam and PDR Laos, live and coexist. Species such as Asiatic elephants, tigers, lepoards, Asiatic rhino's, gibbons and crocodiles are all slowly losing their homes as the number of suitable habitats grows less and less. When deforestation occurs upstream, massive damage as a result of floods occurs downstream. This flooding affects everything, from agriculture (farms being underwater and losing crops, livestock, equipment), to towns and villages being underwater. Funnily enough, the inverse of this situation is that fisheries and their production improve greatly with the more severe floods. Most of the environmental consequences have been discussed in previous sections, so in summing up, Cambodia is a country of rich history and huge potential tourism, it's social ideals still have a fair way to improve, but in Cambodia you can see a country that against all odds has come out of political oppression and started to find it's identity and become a developed country. ...read more.