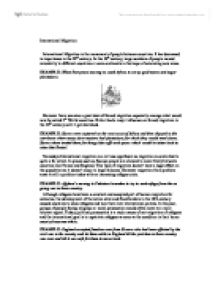 International Migration International Migration is the movement of people between countries. It has decreased in importance in the 20th century. In the 19th century, large numbers of people moved voluntarily to different countries or even continents in the hope of colonizing new areas. EXAMPLE: White Europeans moving to south Africa to set up gold mines and sugar plantations. However there was also a great deal of forced migration especially amongs what would now be called 3rd World countries. Bristol had a major influence on forced migration in the 18th century until it got abolished. EXAMPLE: Slaves were captured on the west coast of Africa and then shipped to the carribean where many slave masters had plantations for which they would need slaves. Slaves where traded there for things like coffe and spices which would be taken back to cities like Bristol. Nowadays International migration is a lot less significant as migration is controlled to quite a far extent. In places such as Europe people are allowed to move freely between countries like France and England. This type of migration doesn't have a huge effect on the population as it doesn't occur in large volumes. However migration from problem areas is still a problem today with an increasing refugee crisis. EXAMPLE: Afghani's moving to Pakistani boarders to try to seek refuge from the on going war in there country. Although refugees have been a constant and accepted part of human migration for centuries, the development of the nation state and fixed borders in the 19th century caused countries to shun refugees and turn them into international pariahs. ...read more.

Approximately 3.7 million East Germans fled to West Germany between 1945 and 1961, when the Berlin Wall was constructed. When refugees flee from a less developed country to a developed country, the refugees can legally remain in the developed country until the situation in their home country has become stable and no longer threatening. However, refugees who have migrated to a developed country often prefer to remain in the developed country since their economic situation is often much better. Unfortunately, these refugees often have to remain illegally in the host country or return to their home country. Forcing people to migrate is against human rights laws and in cases like in Serbia people were being ethnically cleansed and forced to move to neighboring countries. The UN is an organization, which tries to stop these kind of events from happening. In recent years 3 different types of International migration took place: From poor to rich countries Example: From Mexico into southern parts of the USA. These people are looking fro jobs and higher living standards. From drought hit countries Example: From Mozambique to other neighboring countries. Movements of political refugees Example: Jews returning to Israel, which is there Holy land set up specifically for them. Advantages and Disadvantages of Migration Advantages Disadvantages For the host country Economic Social An extra source of labour. Many bring skills and money to the country e.g. brain drain of doctors from UK to USA, voluntary workers to LEDCs. ...read more.

But Pakistani paramilitary forces have been preventing them from crossing over. There are some reports of refugees returning to their villages as Taleban forces have retreated. "We will be home for Ramadan," Habib Allah told the Associated Press news agency. He has been living in a tent for more than a year with his relatives. According to the UNHCR's representative in London, Claire Doole, some 2,500 Afghans have crossed back into Afghanistan from Iran over the last three days. Mixed feelings But there are mixed feelings about the Northern Alliance among the refugees. Many refugees from the city of Herat, which the Alliance captured on Monday, live in the Pakistani capital, Islamabad. Refugees have mixed feelings "We're happy. We've been waiting for this for years, but we'll see if (the Alliance) make the same mistakes again," Omar, a carpet seller, told the French news agency AFP. Fazul Rahim Ansari said he would go back to Herat as soon as possible. "We're all happy now. With the help of God, these guys (the Northern Alliance) won't fight against each other," he said. But social worker Rahima Delir is more cautious. "We'll see if there will be peace, then we'll go back," she told AFP. "We don't trust that there's peace yet." The UNHCR estimates some 135,000 Afghans have fled into Pakistan since the 11 September terror attacks on the United States. That is still a small number compared to the millions of Afghans who left to live in Pakistan and Iran during the years of fighting in Afghanistan. ^ BBC News ...read more.