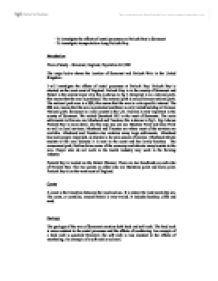 - To investigate the effects of costal processes on Porlock Bay in Somerset - To investigate transportation along Porlock Bay. Introduction Place of study - Somerset, England, Population 447,000 The maps below shows the location of Somerset and Porlock Weir in the United Kingdom - I will investigate the effects of costal processes at Porlock Bay. Porlock Bay is situated on the west coast of England. Porlock Bay is in the county of Somerset and Bristol is the nearest major city, this is shown in fig 1. Somerset is in a national park, this means that the area is protected. The national park is called Exmoor national park. The national park area is a SSI; this means that the area is a site-specific interest. The SSI area means that the area is protected and there is only limited building at Exmoor National park. Somerset is a rural county in the UK. Tourism is very important in the county of Somerset. We visited Quantock Hill in the west of Somerset. The main settlements in this area are Minehead and Taunton; this is shown in fig 3. Fig 4 shows Porlock Bay in more detail. On this map you can see Hulstone Point and Gore Point as well as local services. Minehead and Taunton are where most of the services are available. Minehead and Taunton also contains many large settlements. Minehead has more people employed, as tourism is its main source of income. Minehead attracts tourists to the area because it is near to the coast and has lovely beaches. The amusement park, Butlins drives some of the economy and attracts many tourists to the area. People who do not work in the tourist industry may work in the farming industry. Porlock Bay is located on the Bristol Channel. There are two headlands on each side of Porlock Bay. The two points on either side are Hurlstone point and Gore point. ...read more.

To improve my investigation into costal processes at Porlock Bay I could have used more precise measuring equipment. This could include using a more accurate clinometer, pebbleometer or tape measure. This would have improved my investigation because it would give results that are more accurate. Another way to improve the use of the equipment would be to get trained in the use for the equipment. This was because we were unfamiliar with the equipment, which may give inaccurate results. To make the investigation even more accurate I could have taken measurements from more than just two points at Porlock bay. If I measured at several more points other than Gore Point and Hulstone Point, the data would give a wider range of results. To give more accurate results we could have also measured the pebbles and the facets at the same time of day. This would have improved the accuracy of the results because the tide levels would remain the same. This would mean that material would be transported whilst we travelled from Gore Point to Hulstone Point. If we visited Porlock Bay on more days, it would have improved our results. Our present results only contained one days results, however if we travelled on more days it would give us a wider range of results. To make the investigation more accurate we could have examined more pebbles. This would have increased the accuracy of the results because the odd results and pebbles would be wiped out. This would help my investigation because there would be a greater band of results to examine, and make conclusions on. The time of year also affected my investigation. As we visited Porlock Bay in the summer. The winds would be ideally slow and the sun shining. However , if we visited Porlock Bay in the winter, the winds would be very strong and it may be raining. When we visited Porlock Bay, the conditions were very windy. This means that there would be more waves and there would be more transportation during the day. ...read more.