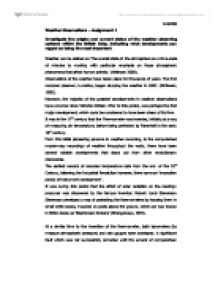 Investigate the origins and current status of the weather observing systems within the British Isles, indicating what developments you regard as being the most important.

Weather Observations - Assignment 1 Investigate the origins and current status of the weather observing systems within the British Isles, indicating what developments you regard as being the most important Weather can be defined as 'The overall state of the atmosphere on a time-scale of minutes to months, with particular emphasis on those atmospheric phenomena that affect human activity.' (Atkinson 2000). Observations of the weather have taken place for thousands of years. The first recorded observer, Lucretius, began studying the weather in 55BC. (McIlveen, 1992). However, the majority of the greatest developments in weather observations have occurred since Victorian Britain. Prior to this period, was perhaps the first major development, which could be considered to have been ahead of its time. It was in the 17th century that the Thermometer was invented, initially as a way of measuring air temperature, before being perfected by Farenheit in the early 18th century. From this initial pioneering advance in weather recording, to the computerised modern-day recordings of weather throughout the world, there have been several notable developments that stand out from other revolutionary discoveries. ...read more.

Another major development in the recording and monitoring of the weather solved the problem of requiring humans to take the measurements. From the early 20th century, the replacement of humans at the site of measurement began with the introduction of automated recording. Morse code was initially used to transfer data in France in 1863, with Britain soon utilising the technology. The network has now expanded to cover the entire world and is regulated by the World Meteorological Organisation (WMO). Communication of data in Europe initially developed in France, links developed in Britain with the formation of the British Rainfall Network (McIllveen, 1992). Linking of data from many sites across the country could then produce a 'weather picture'. Before the 19th century, the Rainfall Network in Britain consisted of approximately 40 rain gauges. Such a number are now common in a single county. Such data (as shown on the enclosed graph paper for Leicestershire) can be converted from 'cartographic format' to 'grid format' (Craddock, 1995). ...read more.