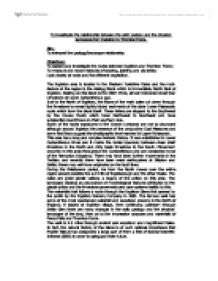 Investigate the relationship between the solid geology and the physical landscape from Ingleton to Thornton Force.

To investigate the relationship between the solid geology and the physical landscape from Ingleton to Thornton Force. Aim: To interpret the geology/landscape relationship. Objectives: To explore and investigate the routes between Ingleton and Thornton Force; To measure and record features of bedding, jointing and dip strike; Look closely at rocks and the different vegetation. The Ingleton area is located in the Western Yorkshire Dales and the main feature of the region is the Askrigg Block which is immediately North East of Ingleton. Resting on this block is the 200m thick, almost horizontal Great Scar Limestone of Lower Carboniferous age. Just to the North of Ingleton, the floors of the main dales cut down through the limestone to reveal tightly folded sediments of the older Lower Palaeozoic rocks which form the block itself. These inliers are stopped to the Southwest by the Craven Faults which trend Northwest to Southeast and have substantial downthrows on their southern side. South of the faults exposures in the Craven Lowlands are not so abundant although around Ingleton the presence of the productive Coal Measures and some Red Beds suggest the stratigraphic level reached is Upper Palaeozoic. This area has a long and complex tectonic history. It was established in Lower Carboniferous times and it marks the facies boundary between clean shelf limestone in the North and dirty basin limestone to the South. ...read more.

The youngest rocks can be found on the down throw of the fault. For a short distance above Manor Bridge the Twiss follows the line of the North Craven Fault. This is the more conspicuous of the great earth fractures in the region. On the left, Carboniferous limestone remains clearly exposed while the right hand bank is underlain by dark shale which is about one hundred and eighty-five million years older than the limestone. Again at this point, the vegetation is very similar to that described at Swilla Glen, as the conditions in this gorge enables ferns, algae and fungi to develop and survive. The presence of this fault provides strong evidence as to why the Upper Ordovician shale gives way to the Lower Ordovician slates and sandstones. Moving on to location two, The quarry exposes a thick sequence of lower Ordovician slates, but just upstream the slates alternate with beds of sandstone - these rocks have been folded up into the vertical position. On examination, the green slate is a greywacke; part of a turbidite sequence and laid down horizontally on the bed of the ancient Iapetus Ocean. Many ripple marks can be seen on the surface of the rock. The Coniston Slates and the Ingleton Slates (Lower Palaeozoic) are exposed. They have no steep dips and are faulted and folded into a syncline. ...read more.

Not only that, but finding the height, width and depth of rocks proved to be difficult, which again, is why the evidence can only be a close approximation. Also it was difficult to observe the bedding planes and joints in the rocks. Finally, an important factor which should be considered is the fact that the students undertaking the investigation were somewhat inexperienced due to it being one of their first field studies. The time of year may affect the reliability of the research as; if it had been completed in the winter - plant vegetation was at a minimum, therefore information would have been clearer and gathered easier. When experimenting to find out how many faults were present in the area, it may have been more effective if some tests were taken in a diagonal line, (across the first fault found), and in an East-west direction. The validity and completion of the field studies could have been measured more accurately with qualified personnel or an in depth understanding of the general area beforehand. Another way to improve the field study next time is to allow the students to experiment for themselves. For example; taking a bottle of acid, would enable the students to test and identify the different rock types (i.e. limestone reacts with acid). Finally, by taking a clinometer, the students could collect their own data and at the same time improve their field study skills. ...read more.